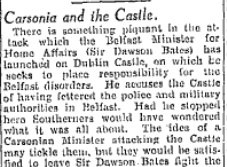 A common complaint by unionists in the early months of the Northern Ireland government was that their new government had limited powers. The Northern Ireland government had almost no control over taxation and was required to pay 90% of their total revenue from taxes directly to the British exchequer. In October 1921, however, the government’s lack of control over policing was of paramount importance to senior unionist politicians. Richard Dawson Bates, the Minister for Home Affairs in Northern Ireland, accused the British administration in Ireland of undermining the new state – a stance the nationalist Cork Examiner sharply criticised in this editorial on 5 October.

There is something piquant in the attack which the Belfast Minister for Home Affairs (Sir Dawson Bates) has launched on Dublin Castle, on which he seeks to place responsibility for the Belfast disorders. He accuses the Castle of having fettered the police and military authorities in Belfast. Had he stopped here Southerners would have wondered what it was all about. The idea of a Carsonian Minister attacking the Castle may tickle them, but they would be satisfied to leave Sir Dawson Bates fight the matter out between them. He says the Castle used the Truce as an excuse to fetter the police and military, and thereby suggests that Sir Hamer Greenwood threw the poor defenceless Orangemen to the wolves. Place not your trust in princes or Chief Secretaries. It is surely strange that everywhere outside Belfast the truce has been well observed, if we except a few regrettable incidents. But the coming of the truce was the signal for the Orangemen of Belfast to take up their guns and bombs, to chase those who did not agree with them, and generally to begin a pogrom against all degrees of Nationalists. It has remained (says the “Westminster”) for Belfast to imperil the truce, and we have the inconvenient evidence of the military authorities that the Orange party was in the main responsible. How much have the leaders of that party done to preserve the peace in Ulster? Have they tried seriously to protect either the lives or the livelihood of the Catholic population, which forms so considerable a minority in the area which they and their followers control? The military were eventually compelled to intervene in Belfast, and it is fairly evident that they ought to have intervened more promptly; but most people will more readily understand their hesitancy than they will the present attitude of Belfast Unionists towards Catholic Ireland, and especially towards the Catholics of Ulster.