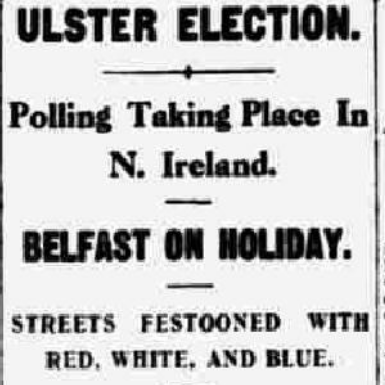 Throughout the six counties of North-East Ulster polling is taking place to-day for the first Northern Irish Parliament. The success of the Unionists is assured, but the Nationalists and Sinn Feiners are putting up a strenuous fight by of demonstrating their resistance to the partition of Ireland.

At no previous election in Ireland has enthusiasm on both sides been wrought up to such exciting heights, and unless large numbers are afraid to go to the polling booths, a record poll is confidently expected.

At eight polling opened briskly all over the province.

Bulletins which are hourly coming to agents’ offices in Belfast report that energy and enthusiasm were well maintained until noon.

In Belfast itself all workpeople are treating the day as a holiday. The shipyards and factories are deserted, and the school children are either released from school or are truants for the day.

Setting out at nine o’clock this morning, I made a two hours’ tour of the liveliest districts in the city.

The streets everywhere were in a state of seething excitement. Union Jacks and pictures of Sir Edward Carson decorated every house in the Protestant neighbourhood, and scarecrow effigies of de Valera were hooked to the tops of lampposts.

Whole streets had their footbaths from end to end elaborately coloured with alternating sections of red, white, and blue, and lampposts were treated with the same loyalist colours.

In Nationalist and Sinn Fein quarters the colour scheme was not so profuse and vivid, but enthusiasm was most intense.

Little processions of youths and young women in all sorts of fantastic guises moved about the Protestant streets, singing ditties of derision and exultation, and countless motor-cars and lorries, which buzzed up and down the narrow streets, recognised no load limits, but carried festoons of clinging children.

Police, armed with revolvers or rifles, were in attendance in full force at the polling stations, and armoured cars kept up a continuous express service through all likely centres of trouble.

For the first hour or so I saw nothing but good humour displayed, but as noon drew near reports of disorder came in from various parts of the city…

In West Belfast a policeman was stoned, and two or three cars were reported to be wrecked.

Several street fights occurred this afternoon, but nothing serious enough to be described as rioting. Several people were treated in hospitals for minor injuries.

In Ballymacarrett, a strong Protestant quarter, I saw two men being very roughly handled by an angry crowd. One of them, an old man, was buffeted, tripped, and knocked down, and the police, with revolvers drawn, had difficulty in protecting him from further maltreatment.

The other man, who was severely mauled, was dragged into a churchyard for safety by the police, and lay there awaiting the ambulance.

Some [said?] they had attempted personation, and others that they belonged to the other side.

At times my sidecar had difficulty in getting past the numerous processions.

One young women who had just dodged out of the way of my wheel remarked jocosely. “You need not run over me. I have not got a vote.”

Women on both sides voted early in large numbers, and as PR appeared to puzzle large numbers of electors, they called first at the committee rooms of their party to get final instructions as to how they were to mark their voting papers.

By order of General Macready, all public-houses in the six counties are closed throughout the day.

Polling goes on till nine, and curfew is set back by half an hour to eleven o’clock.