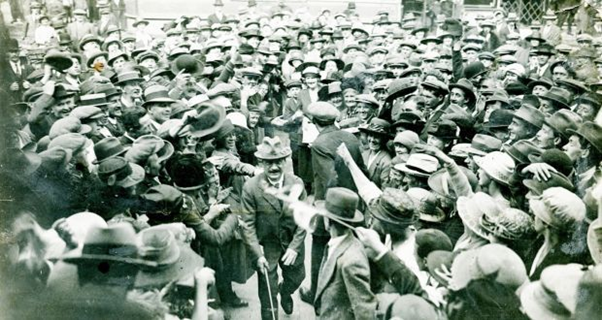 At noon on 11 July 1921, hostilities between the British Army and the army of the self-proclaimed Irish Republic ceased, effectively ending the War of Independence in Ireland. The truce, hastily agreed two days before in overnight talks at Dublin’s Mansion House, brought to an end a two and a half year conflict which had left over 2,000 dead. While guns fell silent across most of the southern part of Ireland, despite a flurry of violence in the 24 hours before the ceasefire, violence continued after the truce in Northern Ireland, sparked by Belfast’s ‘Bloody Sunday’ on 10 July. By the end of that week, 28 people had been killed in Belfast. Newspaper reports from the day of the truce demonstrate the different reactions within unionism and nationalism to the ceasefire. Whereas the Freeman’s Journal blamed instability in Ireland on ‘external oppression’, the unionist Northern Whig warned of the consequences of British acquiescence to violent Republicanism for the citizens of Belfast as conflict raged on in the city.

May it grow into a peace!

Irishmen are the custodians of Ireland's order and Ireland's honour, Mr. de Valera reminds them, during the coming days.

Their trust will be worthily discharged.

They will show to the nations of the world the discipline of an organised nation, and prove that our disorders are the result of the intrusion of external hostility and oppression.

The oppression is lifted for the moment, thanks to the peacemakers.

The world will see the results.

The Irish leader is not a cavalier optimist.

He knows that even now success in negotiating an honourable peace is not assured.

The signs are auspicious, but not all the signs.

The Orange organs are growling in characteristic fashion.

But the honour of the British King is of no account with them.

He appealed to them, in common with the Irishmen of Southern Ireland, " to forgive and forget."

They answer him with snarls.

But that was to be expected.

There are English politicians, too, who would play foul with the Royal peacemaker.

They may again try the huxtering besting methods of the party market, and wreck what have become the world's hopes.

But if they do, it is they themselves who will pay the price.

Lord Bryce has given a good example to outsiders.

He refuses to speak a word on the Irish question, lest he might embarrass the negotiators.

That is the right attitude.

Some statements of important people are neither very helpful nor encouraging, while the incursions of some of the Dalziel Press are simply sinister.

But silence also the Tadpoles.

Belfast gathered some of the first-fruits of Mr. Lloyd George’s latest Irish policy during the weekend. Very “rare and refreshing fruits” they were. Another unprovoked murderous attack on the faithful servants of the Crown, resulting in the death of one of their number, was followed by a night of street fighting and a glorious July Sunday made hideous by bloodshed and the clamour of battle. No fewer than ten deaths have been actually verified, and the total, the exact dimensions of which may never be accurately known, is undoubtedly much larger. The aggregate casualties are considerably over a hundred in number at the time of writing, and may be appreciably increased within the few hours. Engagements in some of the “little wars” of the Empire, which had quite important results, were won at less cost in the lives of English-speaking men….

The Falls ambush and its ghastly sequel are a grim commentary on the official documents which were issued a few hours before. They form a truly unique collection. When the present disgraceful chapter in the history of the United Kingdom is closed the originals might well find a place in a section of Madame Tussaud’s famous exhibition, which has a peculiar fascination for the morbid. “Risteard Ua Maolchatha” (alias Mulcahy), the “Republican Chief of the Staff” (otherwise second in command of the “Army of Assassination”), signed one of these, which was addressed “to the officers commanding all units.” It notified that ”active operations by our troops” would be suspended as from noon on Monday, July 11th, “in view of the conversations now being entered into by our Government with the Government of Great Britain”.

What the “truce” signified was explained in greater detail in a proclamation by “President” De Valera. That eminent patriot (whose actual nationality is still an unsolved problem) led off a with pompous exordium, to the effect that during the period of the truce each individual soldier and citizen must regard himself as a “custodian of the nation’s honour.” We take it that these moving words were addressed, among others, to the still uncaptured assassins of Dean Finlay, Miss Barrington, and hundreds of other victims of the murder gang. How far such criminals are qualified to be the keepers of a “nation’s conscience,” and what sort of a “nation” would be willing to trust them in that capacity, are questions which Mr. De Valera may settle with the members of the Roman Catholic Hierarchy.

The “President”, after assuring his “fellow citizens” that their “representatives” would do their utmost to secure “a peaceful termination of the struggle,” warned them that history and the character the issue to be decided “were a warning against undue confidence.” Here, at all events, all Loyalists will be in perfect agreement with Mr. De Valera. And they will not fail to note his concluding observation, that should force again be “resumed against the nation” the “citizens of the Republic” must be ready to resist, as “thus alone would they secure the final abandonment of force.” Meaning, that the I.R.A. is to be kept “in being,” and ready at the word of command to restart its devilish work of secret assassination, brigandage, and wholesale intimidation.

Beside the sounding fulminations of De Valera and Maolchatha (alias Mulcahy) the communiques from the British military headquarters seem a trifle tame and prosaic. They simply give the terms of the bargain between his Majesty's Government and the leaders of the rebels who are out to destroy its authority in Ireland, and set up a reign of terror in its place. With regard to Mr. De Valera’s undertaking all that need be said is that if he “delivers the goods” his power to control the “Republican” forces, and therefore his responsibility for every abominable crime in the long list of their “achievements,” will be fully established. The Government, on their part, have undertaken to suspend the despatch of reinforcements to Ireland; to stop “raids and searches” by military and police: to remove curfew restrictions in all parts of Ireland; and to “restrict military activity to the support of the police in their normal civil duties.”

The last-named clause seems to have been prematurely put into operation in Belfast yesterday. On what other hypothesis is it possible to account for the fact that the suppression of one of the most fierce and dangerous outbreaks ever known in the city was left almost entirely to the regular constabulary and the Specials? This is not the way to put heart into a body of men who have done splendid service to the State, but have been subjected to an almost intolerable strain for considerably more than year. Moreover, it is bound to fill the loyal civilian population with the gravest forebodings and the most sinister suspicions. The general feeling of insecurity will be aggravated by the decision to abolish the curfew restrictions. Could there be a more unsuitable occasion for this step than the morrow of conflicts in which ten people were killed and ten times that number wounded? The Government claim to be engaged in an operation which they describe as “creating an atmosphere”. It seems only too likely to be an atmosphere in which loyal subjects of his Majesty will find it very difficult to live.