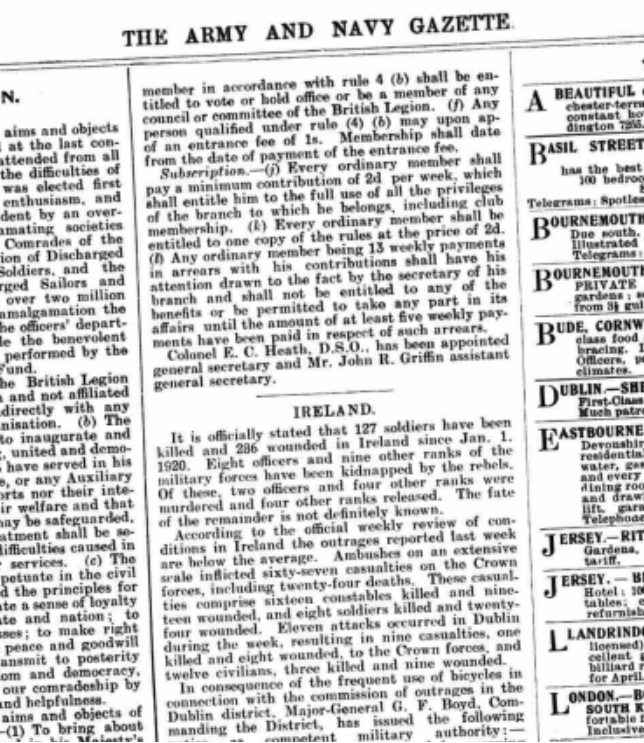 In June 1921, the Army and Navy Gazette updated its readers on casualties to members of the British Armed Forces during the Irish War of Independence. It also commented on the use of bicycles for the ‘commission of outrages’ and later reported on bombs thrown at a military car on Newcomen Bridge, shots fired on train carriages near Ballybrack Station and the arrest of forty men undergoing signalling instructions.

According to the official weekly review of conditions in Ireland, the outrages reported last week are below the average. Ambushes of an extensive scale inflicted sixty-seven casualties on the Crown forces, including twenty-four deaths. These casualties comprise sixteen constables killed and nineteen wounded, and eight soldiers killed and twenty-four wounded. Eleven attacks occurred in Dublin during the week, resulting in nine casualties, one killed and eight wounded, to the Crown forces, and twelve civilians, three killed and nine wounded.

In consequence of the frequent use of bicycles in connection with the commission of outrages in the Dublin district. Major-General G. F. Boyd, Commanding the District, has issued the following notice as competent military authority : — “Bicycles have frequently been used for carrying out murder outrages and other illegal acts. If this continues the use of bicycles in Dublin district will be prohibited. This warning applies to the city of Dublin, and counties of Dublin, Wicklow, and Meath.” The Government has ordered reprisals in Ireland to cease …