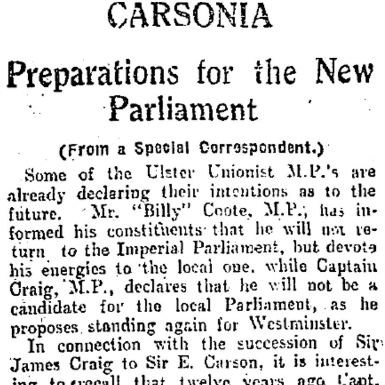 In early 1921, attention turned to the upcoming elections for the new ‘Northern’ and ‘Southern’ parliaments established under the Government of Ireland Act. This report from the Freeman’s Journal suggested that many unionists were using the election in an attempt to turn the six counties into ‘Carsonia’, an exclusively Protestant and unionist state. The unionist MP Charles Craig reportedly attempted to exaggerate the number of Protestants in the six counties. At the same time his brother, the future Prime Minister James Craig, was accused of whipping up sectarian sentiments to try and win the election. The Journal suggested that some unionists were uncomfortable with these tactics, which might split the unionist vote.

Carsonia: Preparations for the New Parliament

Some of the Ulster Unionist MPs are already declaring their intentions as to the future. [...] In a speech this week in the Old Town Hall, Belfast, Captain Craig told his audience that there were ‘800,000 Loyalists as against 300,000 Nationalists’ in Carsonia. The exact number of Nationalists is 429,161. So that the Captain was a trifle of 129,151 out.

In addition, he counts every one of the 800,000 Protestants as Unionists, whereas there are at least 150,000 Protestant Liberals in the six counties. Expert electioneers put the parties in Carsonia as roughly 580,000 Home Rulers (Liberal and Nationalists) and 660,000 Unionists. This explains the deep anxiety in official Unionist circles as to the result of the coming elections, especially under P.R. [...]

The official Unionists are deeply concerned as to what course the Nationalists intend to pursue, and ‘feelers’ have been thrown out to ascertain their intentions. Dr. MacRory in his Lenten pastoral intimated that he was intending to convene a meeting of representative Catholics to decide upon a common platform and united policy. [...]

The strongest card in the possession of Ascendancy is that of sectarian bitterness, and it will be played for all it is worth. This explains Sir James Craig’s repeated declarations that he is an Orangeman, and standing as such, and his remark to his constituents that to him the Orange flag and the Union Jack ‘are one and the same thing’. The Orange drum and the Orange fife will be the most potent instruments in the armoury of Ascendancy, and the tap of the one and the toot of the other are expected to defeat all opposing combinations – Nationalists, Labour and Independent.

It is a recognised fact that moderate elements in Unionism are keenly desirous of seeing a Nationalist and Independent opposition in the new Ulster Parliament. The greatest uneasiness exists lest Ascendancy should get a free hand. The farmers of the six counties are very anxious to safeguard their interests in the new Parliament, and, it is said, there will be farmer candidates – standing independent of all parties. This statement has been made at more than one meeting of the Ulster Farmers’ Union, and in different towns in the North-East of Ulster.

The fear in official circles is that … these different interests will weaken the Ascendancy party materially, and that the Nationalists will seize their opportunity and unite, and perhaps hold the balance of power. Mr T.W. Brown K.C., MP at Newtownards this week, bluntly admitted the foregoing to be the nightmare of his party.