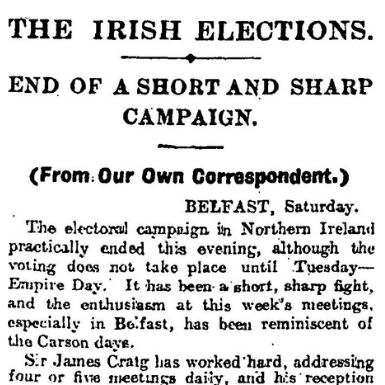 Two days before the Northern Ireland general election, The Observer reported that the Ulster Unionist Party had all but ended its election campaign. The paper underestimated the Unionists’ electoral success as it ended up winning 40 out of 52 seats with 66.9% of the popular vote. On 7 June, James Craig was then appointed as the first Prime Minister of Northern Ireland.

The Irish Elections. End of a Short and Sharp Campaign

The electoral campaign in Northern Ireland practically ended this evening, although the voting does not take place until Tuesday – Empire Day. It has been a short, sharp fight, and the enthusiasm at this week’s meeting, especially in Belfast, has been reminiscent of the Carson days.

Sir James Craig has worked hard, addressing four or five meetings daily, and his reception last night in North and South Belfast was wonderful. Unionists are confident of winning from thirty-two to thirty-five of the fifty-two seats. The party was never more united. There is not a single Independent Unionist in the field, and the handful of extreme Socialists is making no headway. Various trade unions have passed resolutions repudiating them, and Labour is almost solidly on the Unionist side.

The counting of the votes will begin on Wednesday and will probably finish on Thursday night.