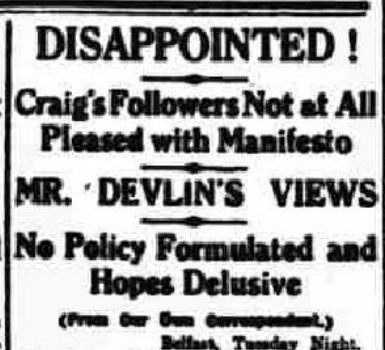 May 1921 saw the first elections to the new Northern Ireland parliament, established under the Government of Ireland Act. In late April Sir James Craig, leader of the Ulster Unionists, published his manifesto for the election. However, critics were quick to point out that rather than a statement of policy, it was a polemical speech that spent more time attacking Nationalists than setting out what the Unionists would do in government. The Freeman’s Journal even suggested that Craig’s election tactics were putting off moderate Unionist voters to the extent that they were beginning to embrace the Nationalist cause.

Disappointed! Craig’s Followers Not at All Pleased with Manifesto

Sir James Craig’s manifesto has undoubtedly caused great disappointment to his followers in Belfast and throughout the North-Eastern Counties.

The document was loudly boomed for days beforehand, and those outside the councils of the small coterie who control the Unionist organisation looked for an elaborate statement of policy.

They are not at all pleased at having a mere electioneering appeal of old-time anti-Nationalist prejudices foisted upon them.

Mr Devlin MP, who is conducting the Nationalist campaign, analysed the manifesto in the course of a conversation with some Press representative to-day. He pointed out that Sir James Craig had not formulated anything which could be described as a policy, and that his references to the coming exploits of the Ulster Parliament were entirely delusive.

For example, Sir J. Craig is himself a champion of the licensing interests, whereas many of those who figure in the Unionist lists as his supporters are fanatical prohibitionists.

The practical work done by the Nationalist candidates and their supporters is already bearing fruit, and promises of assistance and support at the polls have been received from voters hitherto classed as Unionists.