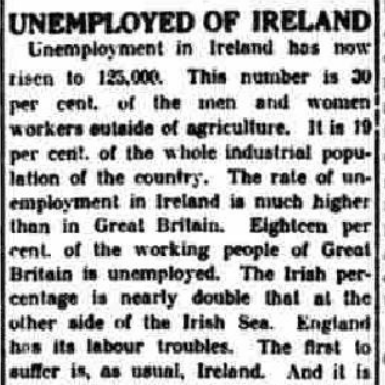 On 16 May 1921, an editorial in the Freeman’s Journal commented on Ireland’s economic woes and high levels of unemployment. The Irish population had declined significantly since the great famine during the mid 19th century, and wages and standards of living were generally much lower than in Great Britain.

The Irish percentage is nearly double that at the other side of the Irish Sea. England has its labour troubles. The first to suffer is, as usual, Ireland. And it is the greatest sufferer in the end. Those who have least to lose can least afford the loss. The little that has been left to Ireland is through many causes, some of which are sufficiently manifest without any seeking, now threatened. The industrial depression is only one of these causes, and not the most potent. Yet relatively it affects Ireland much more seriously than it affects England or Scotland.

The return of unemployment is not the only measure of loss through slackness of work. There are 80,000 returned as employed who are working at reduced hours with correspondingly reduced earnings. In most cases a twenty-four hours’ week is being worked instead of a forty-eight hours’ week. These half-times receive only half wages. Quite a number of them are now working the half-day on only three days of the week, the remaining three working days being days of rest, such as workers earning 25 to 30 per cent. of their usual wages can enjoy. The number of workers in Ireland whose employment is directly affected by the industrial depression is more than 200,000. This is close on forty percent of the whole number. One Irish worker out of three or four is out of work, and in addition the earnings of one out of six are reduced to at least one-half.

… The acute suffering comes home to many of the population because it is exceptional. The chronic suffering does not appear to impress them very much, though it keeps the country poor and forces the population to seek elsewhere an avenue for its skill and talent. Industrial uprising must be sought for through commercial emancipation.