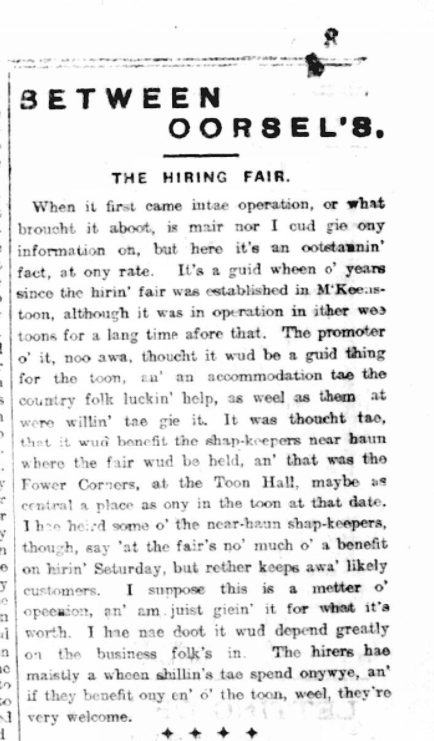 The Ulster-Scots language developed in the north of Ireland from the 17th century onwards, when approximately 100,000 lowland Scots migrated to the island. Indeed, the Ulster-Scots language spoken in Ulster is very close (some would say indistinguishable) from the Scots spoken in the South-West of Scotland. Just as many publications made space for Irish language columns in the early 20th century, plenty of newspapers printed articles in Ulster-Scots. This Ulster-Scots passage from the Ballymena Observer recounts the establishment of a hiring fair in the townland of McKennas Town.

When it first came intae operation, or what broucht it aboot, is mair not I cud gie ony information on, but here it’s an ootstammin’ fact, at ony rate. It’s a guid when o’ years since the hirin’ fair was established in M’Keenstoon, although it was in operation in ither wee toons for a lang time afore that. The promoter o’ it, noo awa, thoucht it wud be a guid thing for the toon, an’ an accommodation tae the country folk luckin’ help, as weel as them at were willin’ tae gie it. It was thoucht tae, that it wud benefit the shap-keepers near haun where the fair wud be held, an’ that was the Fower Corners, at the Toon Hall, maybe as central a place and ony in the toon at that date. I hae heird some o’ the near-haun shap-keepers, though, say ‘at the fair’s no’ much o’ a benefit on hirin’ Seturday, but rether keeps awa’ likely customers. I suppose this is a metter o’ opeenion, an’ am juist giein’ it for what it’s worth. I hae nae doot it wud depend greatly on the business folk’s in. The hirers hae moistly a when shillin’s tae spend onywye, an’ if they benefit ony en’ o’ the toon, weel, they’re very welcome.