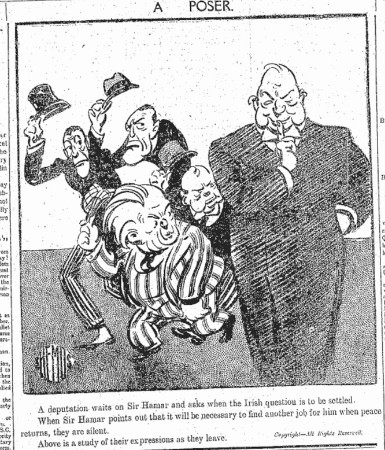 The Freeman's Journal on the British government's attitude to the 'Irish question', accompanying the article about the Belfast convention.

The Government of Ireland Act of 1920 partitioned Ireland, creating two Home Rule states of Northern and Southern Ireland. Partition and the creation of Northern Ireland was fiercely opposed by Nationalists, particularly those living in the six counties. In April 1921 a convention of Nationalists, led by the Belfast MP Joe Devlin, adopted a resolution refusing to recognise the new Ulster parliament. Reported here in the Freeman’s Journal, it shows that nationalists intended to stand in the upcoming elections on an abstentionist platform – refusing to take their seats, like Sinn Féin did at Westminster. However, in the event, Nationalist MPs would sit in the Ulster parliament.

But no Recognition of Carsonite Legislation

A conference of Nationalists from the six counties of the Carson Parliament area of Ulster was held in St Mary’s Hall, Belfast, yesterday, to decide upon the policy to be adopted at the forthcoming Partition elections.

The delegates numbered over 800 and were representative of the clergy and members of public boards and organisations, including the United Irish League, Ancient Order of Hibernians, and Irish National Foresters.

On the motion of Very Rev Canon O’Donnell, PP, VP, Ballymena, seconded by Mr John Hay, solicitor, Dungannon, the chair was taken by Mr Joseph Devlin MP. … The chairman addressed the Convention at considerable length, explaining clearly to the delegates the position as it exists, and emphasising the importance of coming to some definite decision on the matter, so that they might have a clear-cut policy in view of the early approach of the elections.

On the motion of Very Rev Canon Crolly … the following resolutions were passed, with five dissentients:

That this convention of representative Nationalists from the six counties in Ulster, hereby places on record its unalterable belief in the right of Ireland to determine its own destinies according to the aspirations of its own people; that we regard the establishment of a Parliament for a section of this Province of Ulster as a menace to public unity and a danger to the lives and interests of our Northern citizenship, and we feel it our duty to declare alone in a constitutional assembly for all Ireland lies the hope of well-ordered freedom and a spirit of brotherhood and goodwill amongst Irishmen of all creeds and classes.

That we enter our solemn protest against the imposition upon any part of Ireland of a constitution conceived by a foreign legislature for British political purposes, a constitution which has received the support of no section of the Irish representatives, and is regarded with feelings of the deepest hostility by the overwhelming mass of the people of Ulster and of all Ireland;

That believing that this so-called Northern Parliament is a danger to our liberties and a barrier to the permanent solution to Irish problem, we can give it neither recognition nor lend it support, and we call on all those who are opposed to the partition of Ireland to support at the forthcoming North-East Ulster Parliament only candidates who will unreservedly pledge themselves neither to recognize nor enter into it, and for this purpose we authorize the calling immediately of conference to select candidates pledged on the policy of self-determination and anti-partition.

The delegates from the various counties then constituted themselves into sub-committees to arrange the calling of conventions for the selection of candidates and for the creation of the necessary election machinery in the different constituencies.

The Freeman's Journal on the British government's attitude to the 'Irish question', accompanying the article about the Belfast convention.