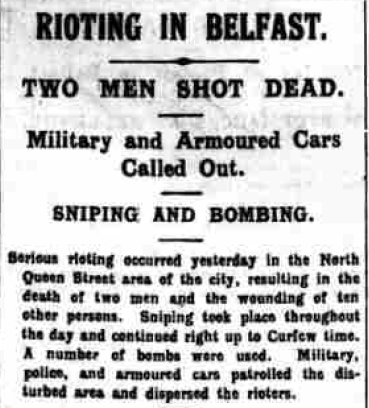 From 29 August to 1 September, Belfast witnessed a resurgence of violence as approximately twenty people died in street disturbances across the north and west of the city. The following report includes details of rioting in the North Queen Street area, in which two men were shot dead and ten others were injured. Among the wounded were fifteen-year-old John Moutray, who received a bullet wound to the head and seventeen-year-old Margaret Rooney, who suffered a bullet wound to the thigh.

Military and Armoured Cars Called Out.

Serious rioting occurred yesterday in the North Queen Street area of the city, resulting in the death of two men and the wounding of ten other persons. Sniping took place throughout the day and continued right up to curfew time. A number of bombs were used. Military police, and armoured cars patrolled the disturbed area and dispersed the rioters.

The trouble broke out at about 10.15 a.m., following an assault of a party nature which took place at the corner of Lepper Street and Meadow Street. What was originally a minor incident rapidly developed into a serious riot, and in a short time rival mobs were in conflict. Shots were fired, but on this occasion no one was injured. The police arrived in considerable strength and succeeded in dispersing the rioters.

Feeling ran high in the neighbourhood, and about 12.15 the shooting was renewed, and the trouble extended into Vere Street, Dale Street, and North Queen Street. Military and armoured cars reinforced the police, and patrols operated in the labyrinth of small streets in the disturbed area. The contending factions disappeared, but sniping was continued from houses and other places of concealment throughout the evening.

In the course of the shooting two men were killed. One was a Dundalk man named Thomas J. Rafter, aged 21, who, it is stated, had just arrived on a visit to the city. He was shot dead in North Queen Street. The other victim, Colin Fogg (45), a carpenter, residing at 25, Lawther Street, was shot in the head at the corner of Lepper Street and Duncairn Gardens, and died a few minutes after admission to the Mater Hospital, Ten other persons were injured by snipers in the course of the day, one being a woman named Margaret Rooney, of Upper Library Street, who received a bullet wound to the thigh.

A dwelling-house in Vere Street was set alight, but the Fire Brigade succeeded in extinguishing the outbreak before any serious damage was done.

Sniping became more intense after darkness fell, the police and military having difficulty in locating the snipers, as the street lamps in the area were unlighted. After curfew further attempts were made to set fire to houses in Vere Street, and the Fire Brigade was again called upon. There was some firing at intervals till midnight…