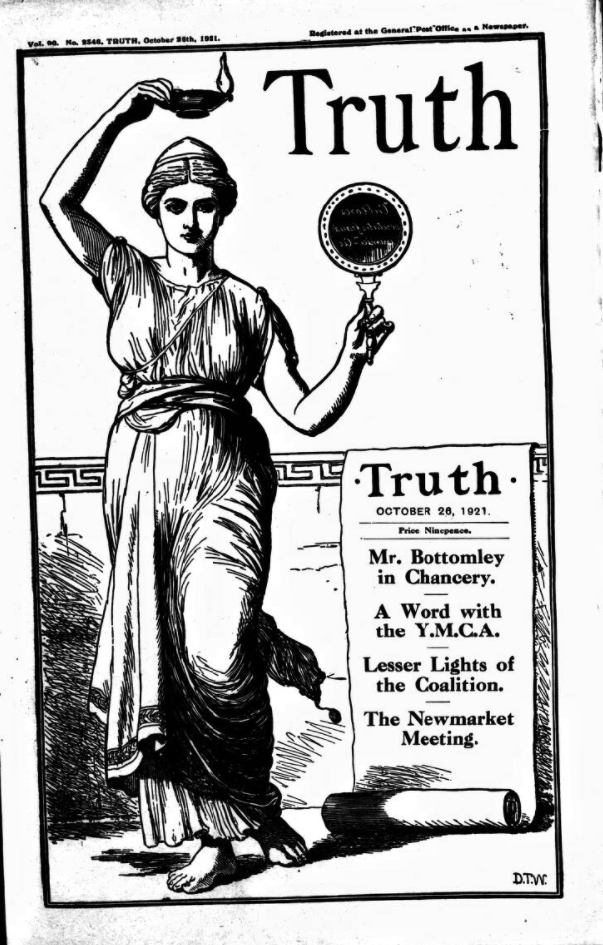 Truth was a popular weekly magazine published in London in the late 19th and early 20th century, at one point reaching a circulation of over a million copies. The magazine, founded by a Liberal Party MP in 1877, was well-known for its fearless exposés of corruption and sleaze but also developed a reputation for vicious antisemitism and anti-feminism. In this comprehensive article on 26 October 1921, Truth considers the recent political upset caused by Éamon de Valera’s letter to Benedict XV and takes a broader perspective on the ongoing Anglo-Irish negotiations.

De Valera and the Pope

As has been remarked in these columns more than once, Ireland is the most unlucky country of history. She seems fated always to have the cup dashed from her lips when she is on the point of drinking, and the worst part of the tragedy is that this has been done by Irish hands as often as English. When De Valera wrote his letter to the Pope he must have been inspired by the same demon that threw Parnell into the arms of Kitty O’Shea just when he had the ball at his feet. At the time of writing this it looks as if his plenipotentiaries might repair the mischief, but it also looks as if they find this difficult. The President has put them in a hole as well as everybody else.

De Valera may be a very inspiring personage as a revolutionary war-winner, but what sort of a mess he would make of guiding a peace administration baffles the imagination. A more impossible man to deal with could hardly exist. He must have known perfectly well before he wrote his last letter to Mr. Lloyd George that if his republicans are to enter “the association of nations known as the British Empire” they must be technically subjects of the King. The Prime Minsiter’s language had put this beyond doubt. Why does he despatch envoys to a conference on this basis and then suddenly proclaim that it will never be accepted? Why does he find the prayerful exchange of amenities between the King and the Pope a suitable occasion for his outburst? He is reputed a Catholic. Why should he go so far out of his way to put the Holy Father in his place? It is hardly the behaviour of a normal man, but that does not alter the mischief of it. Poor Ireland!

Before the publication of De Valera’s telegram Mr. Chamberlain had conceded the demand of the Unionist malcontents in the Houe of Commons for a day to discuss the situation in Ireland. This concession boded no good, for a public debate could not possibly help the Downing Street conversations. The Ulster Premier’s anxiety for a discussion in Westminster of the anomalous position of the Northern Parliament is quite a different matter. That Parliament is as yet only a simulacrum. It has set up house for itself on a lavish scale, but it is terribly stinted for £ s. d., and it cannot levy a tax or move a policeman. The Imperial Parliament has deferred the devolution of power to Belfast in the hope that a settlement would be reached with the rest of Ireland.