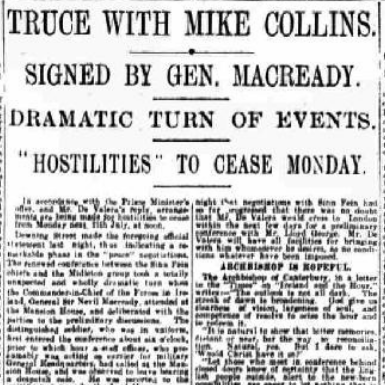 Following over two years of guerrilla warfare between British Forces and the Irish Republican Army, on 9 July 1921 a truce was signed and came into effect two days later. This paved the way for negotiations, which eventually resulted in the signing of the Anglo-Irish Treaty in December 1921. The following report, published in the Belfast Telegraph relayed news of the truce and arrangements for the end of hostilities.

In accordance with the Prime Minister’s offer, and Mr. De Valera’s reply, arrangements are being made for hostilities to cease from Monday next, 11th July, at noon.

Downing Street made the foregoing official statement last night, thus indicating a remarkable phase in the “peace negotiations”. The renewed conference between the Sinn Fein chiefs and the Midleton group took a totally unexpected and wholly dramatic turn when the Commander-in-Chief of the Forces in Ireland, General Sir Nevil Macready, attended at the Mansion House, and deliberated with the parties to the preliminary discussions. The distinguished soldier, who was in uniform, first entered the conference about six o’clock, prior to which hour a staff officer, who presumably was acting as carrier for military General Headquarters, had called at the Mansion House, and was observed to leave bearing a despatch case. He was escorted to the waiting motor-car by the Lord Mayor.

General Macready was at once recognised, and subdued cheers greeted his arrival. He was in the conference room about half an hour. Meanwhile many rumours gained currency, and the possibilities of the situation were easily discussed. The Commander-in-Chief drove away, but returned in an hour when his reception was of a somewhat mixed character. The second visit was of brief duration, and he finally left in company with Lord Midleton and his colleagues.

The presence of General Macready was interpreted as indicating the arrangement of a truce, and confirmation of this was first found in an official statement issued from the Mansion House subsequently. According to the Central news Dublin correspondent, “the preliminaries of a ‘truce’ have been completed, and the General’s signature and that of Michael Collins appended to the terms of the truce.” General Macready attended the conference unescorted.