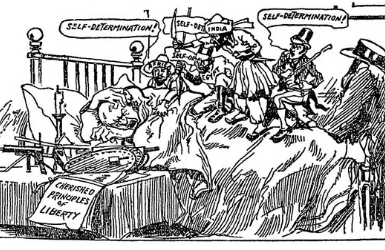 The events of the War of Independence on the island of Ireland took place against a wider backdrop of emerging independence movements and growing agitations against empires. In India, also part of the British Empire, 1920–22 was the first sustained attempt by Mohandas Gandhi and his followers to secure independence. Gandhi’s ‘non-cooperation movement’ saw Indians withdraw their labour that would ‘sustain the British government and economy in India’, often leading to strikes and riots. This extract from the Sunday Independent in March 1921 details one such incident in Uttar Pradesh in the north of the country, where police officers attempting to break up a political meeting were set upon by the crowd.

Trouble in India: Crowds Fired on by Police

The Secretary of State for India has received [the] following report at the fact of another local riot ending in regrettable loss of life, which has occurred in the Rae Bareli district of the United Provinces, as the result of local agitation.

Information was received that four itinerant agitators intended to hold a large meeting and make speeches … on the 20th March, which is a bazaar day.

Orders were issued prohibiting speeches at the meeting, and for the arrest of the four agitators. The sub-inspector of Salon, accompanied by one other inspector and five armed police, went to Kahalya on the 20th March, and arrested Beijpal Singh and Shenku Singh, two of the agitators mentioned above.

They were attacked by the crowd, who rescued the prisoners and drove back the police, who intreated firing, and took refuge in a house belonging to a widow Taluqdar lady. In this house they were besieged by the crowd, who tried to break in, but were repulsed by the fire of the police. Two of the rioters were killed and five wounded in this affair.

The besieged succeeded in communicating with the Deputy Commissioner. The latter, with other officers and 28 armed police, arrived in a motor-bus and rescued the besieged police, who were being threatened with death by the leaders of the mob. The Deputy Commissioner endeavoured, but without success, to induce the crowd to disperse. Their leaders continued to harangue them throughout the night, assuring them that Gandhi would arrive in the morning.