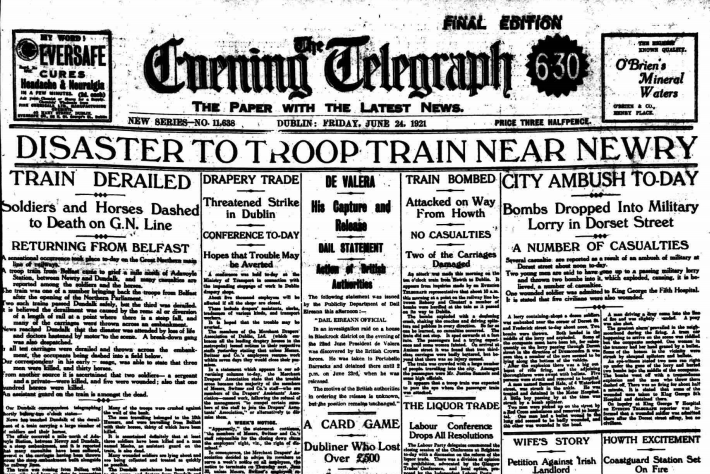 In his speech opening the Parliament of Northern Ireland, King George V called for peace and reconciliation across Ireland. Two days later, however, the IRA targeted military personnel returning from the ceremony in Belfast. On the morning of 24 June, a bomb squad attacked a military train at Adavoyle, close to the Irish border. The train was carrying a detachment of the 10th Royal Hussar officers and their horses, who were due to board a ferry from Dublin to Holyhead. Four soldiers and over eighty horses were killed in the attack, and a train guard and a farmer were shot dead in the ensuing crossfire. The Illustrated London News reports on the attack.

A troop train from Belfast came to grief a mile north of Adavoyle Station, between Newry and Dundalk, and many casualties are reported among the soldiers and the horses.

The train was one of a number bringing back the troops from Belfast after the opening of the Northern Parliament.

Two such trains passed Dundalk safely, but the third was derailed.

It is believed the derailment was caused by the removal or diversion of a length of rail at a point where there is a steep fall, and many of the carriages were thrown across an embankment.

News reached Dundalk that the disaster was attended by loss of life and doctors hastened by motor to the scene. A break-down gang was also dispatched.

In all ten carriages were derailed and thrown across the embankment, the occupants being dashed into a field below.

Our correspondent in his early message, was able to state that three men were killed, and thirty horses.

From another source it is ascertained that two soldiers—a sergeant and a private—were killed, and five were wounded; also that one hundred horses were killed.

An assistant guard on the train is amongst the dead…