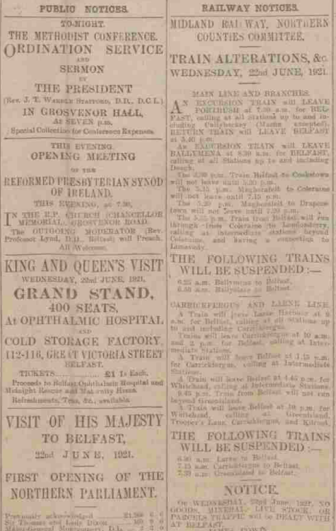 Two days before King George V’s visit to Belfast, The Northern Whig printed a series of notices from railway companies, such as the Midland Railway and the Great Northern Railway, outlining their services on 22 June. The following notice, issued by the Belfast and County Down Railway, show that many people travelled from areas outside of the city to see the royal visit and state opening of the Northern Ireland parliament.

Belfast and County Down Railway. Royal Visit to Belfast

On WEDNESDAY, 22 JUNE, RETURN TICKETS AT SINGLE FARES Will Be Issued TO BELFAST.

FROM MAIN LINE STATIONS, Castlewellan to Comber, also from Ardglass Line, Ballynahinch, and Stations on the Donaghadee Branch; and from Bangor, Carnalea, and Helen’s Bay by Morning Trains. Also by Special Trains (Third Class only) leaving Donaghadee at 9 a.m. and Bangor at 9.30 a.m.

For particulars of Trains and Fares see Placards and Handbills at Stations.

WORKMEN’S TRAINS.—The Workmen’s Trains between Donaghadee, Bangor, and Belfast WILL BE SUSPENDED on this day.

GOODS TRAFFIC.—There will be no Goods, Mineral, Cattle, or Parcel Traffic transacted at any Station on the Company’s system,