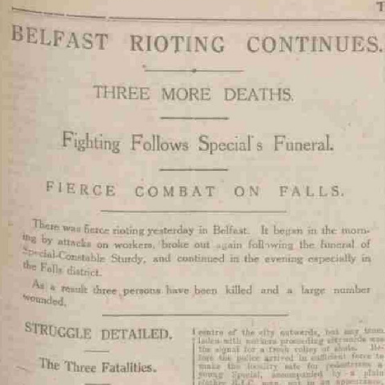 On 14 June 1921 intense rioting and fighting in West Belfast resulted in three deaths. The disturbances began when a group of Special Constables came under attack on Cupar Street as they returned from the funeral of their colleague Thomas Sturdy. Sturdy was killed by a sniper in the north of the city two days before, the first Special Constable to be killed in Belfast. As the Special Constables returned fire on their attackers, a local 18 year old, Kathleen Collins, was killed in the crossfire while standing at her front door. Communal conflict continued for the rest of the day in the Falls Road area. William Frazer, a twelve year old Protestant, was shot dead by a sniper as he searched for his sister. Hugh McAree, a 28 year old Catholic ex-soldier who rushed to aid Frazer, was also killed.

That evening in the House of Commons Joe Devlin, the MP for the Falls area, delivered an impassioned and scathing critique of the British government’s policy in Northern Ireland. Devlin highlighted the murders of William Kerr, Malachy Halfpenny, and Alex McBride two days before. The three men were each arrested by a group claiming to be the police: their bodies were later found riddled with bullets in a North Belfast field. Of the three, only McBride was actively involved in Sinn Fein. Halfpenny was a postman who served as a solider during the First World War, while Kerr was a hairdresser whose brother was in the Royal Irish Rifles. Kerr’s sister later testified to the Military Court of Inquiry that members of the Ulster Special Constabulary visited the house to take her brother away. Devlin’s request for an adjournment debate on the matter is defeated by 192 votes to 64, and the apoplectic Nationalist MP has to be physically removed from the chamber.

The same day also saw Tom Casement, the brother of the executed Republican leader Roger Casement, put Eamon de Valera in touch with South African Prime Minister and former Boer rebel Jan Smuts. Smuts wrote to David Lloyd George on 14 June, criticising British policy in Ireland and urging him to begin peace negotiations. Smuts proposed that the King’s speech at the opening of the Northern Ireland parliament the following week should be used to extend an olive branch to Republicans.

There was fierce rioting yesterday in Belfast. It began in the morning by attacks on workers, broke out again following the funeral of Special-Constable Sturdy, and continued in the evening especially in the Falls district. As a result three persons have been killed and a large number wounded.

The deceased are a young girl named Kathleen Collins, aged 18, of Cupar Street, who died of a bullet wound sustained in the abdomen. She was shot in the course of a disturbance which occurred in the afternoon in the neighbourhood of Cupar Street. Some special constables were returning from the funeral of a deceased comrade in an armoured lorry. They were attacked by a crowd at the corner of Cupar Street, and replied to the fire. There were a number of casualties, and the injured girl and others who were wounded were brought to the Mater Hospital. She died about 4 o’clock in the afternoon. In the evening when rioting was in progress in the Falls district the bodies of a young man aged about 22 or 24, and a boy, aged about 12 or 14, were brought in a Crossley tender to the Royal Victoria Hospital. Medical examination showed that life was extinct, and the identity of the deceased has not yet been established.

The most continuous rioting of the day took place in the Falls district. Subsequent to the time when the girl Collins was shot the entire locality from North Howard Street right up towards the Springfield Road was in a terribly disturbed state. At North Howard Street, Northumberland Street, Conway Street, and Cupar Street fierce battles were in progress. Those of the thoroughfares which run between the Falls and the Shankhill Roads were each the scene of a duel between opposing crowds armed with revolvers and rifles. The struggle was conducted in thoroughly scientific fashion, with sandbags forming a barricade at each end.

The military and police did their best to put an end to as fierce an outburst of rioting as has ever been seen in the city, but the disturbance was so general, at times when they would be dealing with one struggle there would be renewed activities in some other part of the district.

Speech by Joseph Devlin, Nationalist MP for Belfast Falls, in the UK House of Commons, 14 June 1921

I do not think that I owe an apology to the House for taking advantage of the rule which permits us to discuss matters of most vital concern, not only to our constituents, but to public liberty, and even humanity. Perhaps there has been no record so ghastly as the story which I propose to submit to the House to-night. The condition of Ireland is exceedingly sad. We have witnessed in the supposed interests of law and order a policy of repression unparalleled in the history of violence, which has been pursued by the Government in order, as they state, to preserve law and order in that country. Yet I say, and I will prove it, that if there are to be found in any country in the world malefactors with the stigma of crime upon their record, they sit upon the Front Bench opposite. They are the responsible agents for cruelties perhaps as horrible as any that have ever been told in Armenia or in any other country where horrors are perpetrated against the people.

In the city of Belfast, during the last six months, we have been accustomed, among other things, to murders, Government murders, military murders, murders embellished with all the glory of authority, which are perhaps of as ghastly a character as ever were committed.

I am always anxious to enlighten Englishmen about Ireland. After half-past 10 o'clock at night, no civilian can walk the streets of Belfast; no motor car is allowed to go through the streets of Belfast, and the city is like a city of the dead. Who was it, if it was not the forces of the Crown, who were able to rampage over the whole city at 1 o'clock in the morning, to stop at three different and distinct houses, to take these three men out from their families, bring them to lonely roads, assassinate them and leave them there dead, only to be found when the curfew was over in the morning?