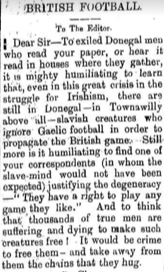 Gaelic games were closely woven into the developing sense of Irishness in the early 20th century and Gaelic teams were often recruiting grounds for republican revolutionaries. Republican purists encouraged the playing Hurling and Gaelic Football and the rejection of other sports, which were often seen as diluting Irish culture or celebrating British customs. This letter from an Irish-American emigrant, published on the front page of the nationalist-sympathetic Donegal Democrat on 23 September 1921, expresses outrage at stories of people playing “British” football in rural Donegal.

Dear Sir – To exiled Donegal men who read your paper, or hear it read in houses where they gather, it is mighty humiliating to learn that, even in this great crisis in the struggle for Irishism, there are still in Donegal – in Townawilly above all – slavish creatures who ignore Gaelic football in order to propagate the British game. Still more is it humiliating to find one of your correspondents (in whom the slave-mind would not have been expected) justifying the degeneracy – “They have a right to play any game they like.” And to think that thousands of true men are suffering and dying to make such creatures free! It would be a crime to free them – and take away from them the chains that they hug.