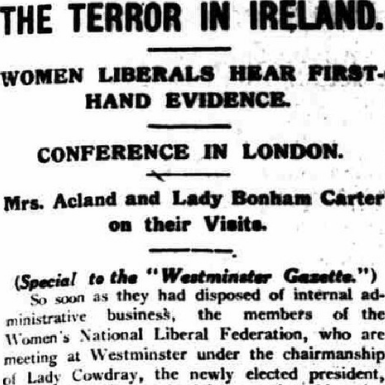 In May 1921, the Women’s National Liberal Federation met in Westminster to discuss recent developments in Ireland. At this meeting it passed a resolution calling for an ‘immediate truce and amnesty, and for the withdrawal of the Auxiliary Forces from Ireland’. It urged further ‘the Government to enter into immediate negotiations with the elected representatives of the Irish people’. The following article, published in The Westminster Gazette, a Liberal newspaper, reported the views of Eleanor Acland and Violet Bonham Carter, who believed that the majority of the Irish people were in favour of Dominion Home Rule.

Both Mrs. Acland and Lady Bonham Carter—who seconded the resolution—have recently visited Ireland on behalf of the Federation to see the conditions prevailing there for themselves, and their at-first-hand accounts of the circumstances which they encountered aroused the Women Liberals to exclamations of horror. Mrs. Acland roundly declared that a kind of devil had got hold of Irish affairs, and could only be driven out by prayer and fasting.

Going to Ireland to-day (said Lady Bonham Carter) was not merely like going into a different country, but was like going into another century—into the Middle Ages! Freedom, safety, and justice, the birthrights of British citizenship, simply did not exist. For the Black and Tans were not so much to blame as the Government. “The Government is using these men as targets and tools,” she declared. “They are risking their lives—and losing their souls—in carrying out duties which no Englishman should be asked to perform.” And they were living under quite impossible conditions. There was not a clean military despotism in Ireland, but a Terror, and assassinations by agents of the Government were an everyday factor on the conditions over which the British flag was flying …

A bright streak in the dark sky during her visit to Ireland, she said, was that nowhere did she find any trace of racial animosity. There was hatred of the Government and of the Black and Tans, but not of England. “The day on which we recognise Ireland as a nation we shall find her as a friend.”

How much longer was human life to be sacrificed to the “blind and bitter density of British statesmanship”? she asked “Do the people of England care? Have our hearts become too cold and dumb for these things to touch them? Let a voice go out from us, the Liberal women of England,” she concluded, “demanding that this terror be lifted from the Irish people and this shame from us.”