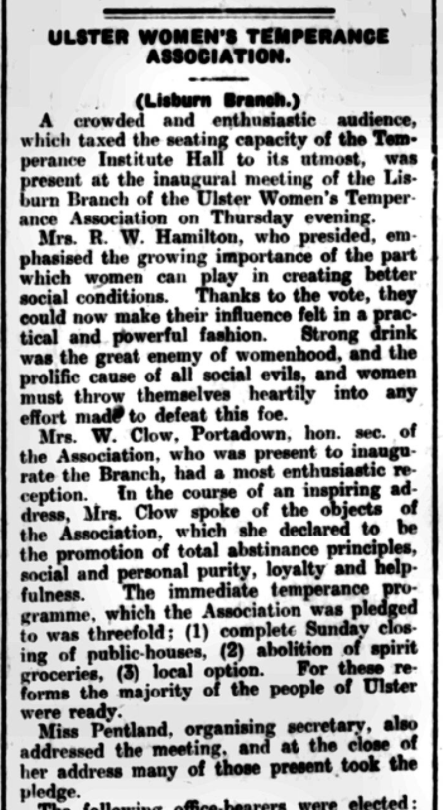 The Ulster Women's Temperance Association continued to grow throughout the early 20th century. This article from the Lisburn Standard reports on the foundation of the Lisburn Branch of the association. Rousing speeches highlighted women's role in bettering social conditions and emphasising that "strong drink was the great enemy of womenhood" –highlighting that women's safety was possibly the most significant driver for temperance. 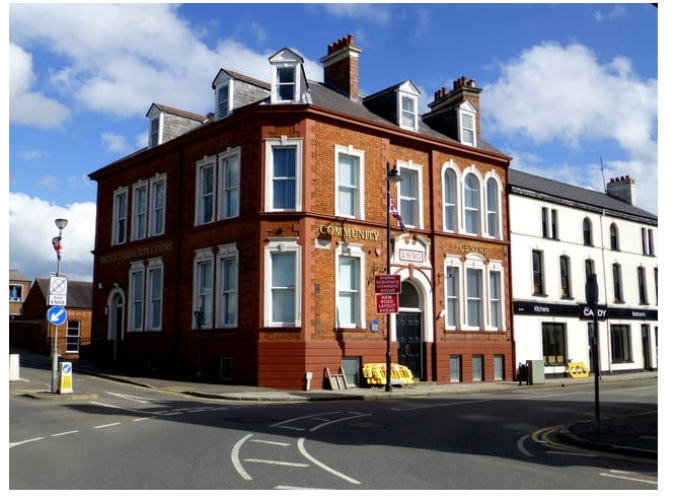 A crowded and enthusiastic audience, which taxed the seating capacity of the Temperance Institute Hall to its utmost, was present at the inaugural meeting of the Lisburn Branch of the Ulster Women's Temperance Association on Thursday evening.

Mrs. R. W. Hamilton, who presided, emphasised the growing importance of the part which women can play in creating better social conditions. Thanks to the vote, they could now make their influence felt in a practical and powerful fashion. Strong drink was the great enemy of womenhood, and the prolific cause of all social evils, and women must throw themselves heartily into any effort made to defeat this foe.

Mrs. W. Clow, Portadown, hon. Sec. of the Association, who was present to inaugurate the Branch, had a most enthusiastic reception. In the course of an inspiring address, Mrs. Clow spoke of the objects of the Association, which she declared to be the promotion of abstinence principles, social and personal purity, loyalty and helpfulness. The immediate temperance programme, which the Association was pledged to was threefold; (1) complete Sunday closing of public-houses, (2) abolition of spirit groceries, (3) local option. For these reforms the majority of the people of Ulster were ready.

Miss Pentland, organising secretary, also addressed the meeting, and at the close of her address many of those present took the pledge.

After the meeting it was found that 170 women and girls had joined the branch. This number is likely to be largely increased in a short time as an enthusiastic and vigorous recruiting campaign has been started.