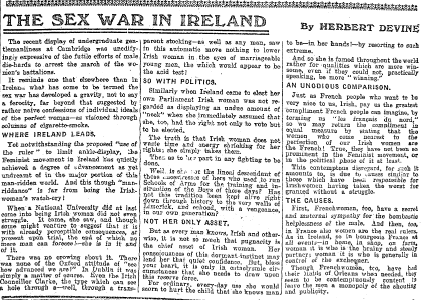 Many people considered Ireland a progressive place in terms of gender relations during the revolutionary period. The first woman in Britain and Ireland to be elected to parliament was the Irish republican Constance Markievicz in 1919. She later became the first woman to serve in a cabinet in the first Dáil Éireann. Irish women were also a step ahead in terms of education. Trinity College Dublin decided to award degrees to women long before Oxford or Cambridge in England (although after other universities in London and Durham). Trinity even allowed female students from Oxford and Cambridge (who were not allowed to graduate from those universities) to graduate from Trinity’s campus from 1904 to 1907. Contemporary observers noted this relative progressiveness. This article, written for the Irish Independent by Herbert Deviné, compares Ireland’s feminist record by 1921 favourably with her European neighbours.

The Sex War in Ireland – by Herbert Deviné

The recent display of undergraduate gentlemanliness at Cambridge was unedifyingly expressive of the futile efforts of male die-hards to arrest the march of the women’s battalions.

It reminds one that elsewhere than in Ireland what has come to be termed the sex war has developed a gravity, not to say a ferocity, far beyond that suggested by rather naïve confessions of individual ideals of the perfect woman – as visioned through columns of cigarette-smoke.

Yet notwithstanding the proposed “use of the ruler” to limit ankle-display, the Feminist movement in Ireland has quietly achieved a degree of advancement as yet undreamt of in the major portion of this man-ridden world. And this though “man-riddance” is far from being the Irish woman’s watch-cry!

When a National University did at last come into being Irish woman did not even struggle. It came, she saw, and though some might venture to suggest that it is with already perceptible consequneces, at present upon trial, the end of which no mere man can foresee!- she is in it and of it.

There was no crowing about it. There was none of the Oxford attitude of “see how advanced we are!” In Dublin it was simply a matter of course. Even the Irish Councillor Clarke, the type which can see a hole through a – well, through a transparent stocking – as well as any man, saw in this automatic move nothing to lower Irish woman in the eyes of marriable young men, the which would appear to be the acid test!

Similarly when Ireland came to elect her own Parliament Irish woman was not regarded as displaying an undue amount of “neck” when she immediately assumed that she, too, had the right not only to vote but to be elected.

The truth is that Irish woman does not waste time and energy shrieking for her rights; she simply takes them.

Then as to her part in any fighting to be done.

Well, is she not the lineal descendent of those ancestresses of here who used to run Schools of Arms for the training and instruction of the Boys of those days? Has not this tradition been kept alive right down through history to the very walls of Limerick, and echoed, with a vengeance, in our own generation?

Not Her Only Asset

But as every man knows, Irish and otherwise, it is not so much that pugnacity is the chief asset of Irish woman. Her consciousness of this dormant instinct may lend her that quiet confidence. But, bless your heart, it is only in cataclysmic circumstances that she needs to draw upon this reserve force.

For ordinary, every-day use she would scorn to hurt the child that she knows man to be – in her hands! – by resorting to such extreme.

And so she is famed throughout the world rather for qualities which are more winsome, even if they could not, practically speaking, be more “winning”.

Just as French people who want to be very nice to us, Irish, pay us the greatest compliment French people can imagine, by terming us “les français du nord,” so we may return the compliment in equal measure by stating that the women who come nearest to the perfection of our Irish women are the French! True, they have not been so prominent in the Feminist movement, or in the political phrase of it at least.

This contemptuous disregard, for such it amounts to, is due to causes similar to those which have been responsible for Irishwomen having taken the worst for granted without a struggle.

First, Frenchwomen, too, have a secret and maternal sympathy for the bombastic helplessness of the male. And then, too, in France also women are the real rulers. As in Ireland, so in bourgeois France at all events – in home, in shop, on farm, woman it is who is the brainy and steady partner; woman it is who is generally in control of the exchequer.

Though Frenchwomen, too, have had their Maids of Orleans when needed, they seem to be contemptuously content to leave the men a monopoly of the shouting and publicity.