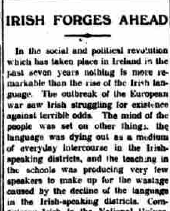 In August 1921, an editorial in the Dublin Evening Telegraph noted a recent rise in use of Irish. Prior to 1921, cultural nationalist groups such as the Gaelic League (Conradh na Gaeilge) advocated the development of policies in favour of the Irish language, but often found itself in opposition to a state which was openly hostile to its aims. With the creation of the Irish Free State in 1922, Irish was designated as the ‘national language’ in the Constitution and became a compulsory part of the school curriculum.

In the social and political revolution which has taken place in Ireland in the past seven years nothing is more remarkable than the rise of the Irish language. The outbreak of the European war saw Irish struggling for existence against terrible odds. The mind of the people was set on other things, the language was dying out as a medium of everyday intercourse in the Irish-speaking districts, and the teaching in the schools was producing very few speakers to make up for the wastage caused by the decline of the language in the Irish-speaking districts. Compulsory Irish in the National University had proved disappointing in its results in every respect except in its admission of the principle that the Irish language should be an essential element in higher education in Ireland, just as the recruiting pamphlets in Irish issued in the early stages of the war were a recognition by the British Government of the existence of the Irish-speaking districts.

Now all is changed. Instead of public apathy there is an intense enthusiasm for the Irish language. The sneers of the British Premier a couple of years ago di more to arouse the spirit of the Irish speakers in the Irish-speaking districts than hundreds of appeals by Gaelic League workers and the attacks on Irish by agents of the British Government in Ireland only stimulated the interest of the public in the language. Such is human nature, and especially Irish human nature that opposition and aggression succeeded where friendly appeals failed. This aggression helped in the election of Irish-speaking representatives to the public boards and Dail Eireann, and gave administrative power to friends of the Irish language. The result is to be seen in the growing use of Irish for all the purposes of modern life and in the extraordinary development in the teaching of Irish in the schools.

The value of a highly inflected language like Irish as an instrument for the training of the mind has not yet been fully recognised, nor has the teaching equipment been such as to enable the fullest advantage to be taken as an instrument of culture. But this aspect of Irish studies is now receiving attention, and in the new Ireland Irish will be an important factor in all branches of education. The reports and debates at the Ard Fheis of the Gaelic League yesterday and to-day and the conference on intermediate education held at the Mansion House yesterday show the progress which has been made during the past year. The publication of the Bible in Irish, which is now to be pushed forward rapidly as a result of yesterday’s decision of the Ard Fheis, will mark an important stage in the development of the language.