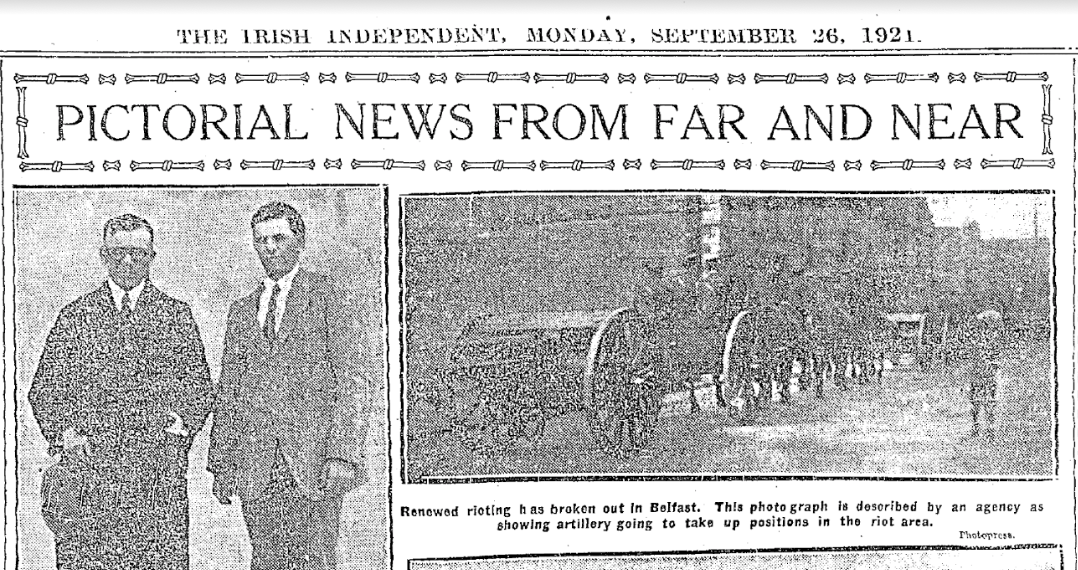 During the revolutionary period, Belfast suffered high levels of violence. Between 1920 and 1922, 58% of those killed in Belfast were Catholic despite only making up 28% of the city’s population. This harrowing story from the Irish Independent recounts a particularly violent weekend in late September 1921 where “Orangemen wearing bandoliers filled with bullets” gunned down several Catholic civilians.

A War of Extermination

The Orange mob, those “peaceful and well-disposed citizens” for whom the British Parliament shows such consideration, have again indulged in an orgy of gunfire and bomb-throwing. On Saturday, without reason or warning, Orangemen wearing bandoliers filled with bullets, carrying guns, revolvers, and hand-grenades, appeared openly in the streets and began their attack. Though subsequently forced to retreat by the military, they soon after reappeared on other streets and resumed operations. But for the serious consequences suffered by the unfortunate Catholics of Belfast, one might imagine the military and the armed Orangemen engaged in a game of hide-and-seek. It seems curious that these attacks are allowed to continue without any serious measures being taken to end the reign of terror. Hundreds of Orange gun-men can march into and out of the Catholic districts, leaving dead and dying in their wake, yet no arrests are made. Military Headquarters last night reported a further outbreak, which resulted in between twenty and thirty casualties. Could this latest case of bomb-throwing and shooting have taken place if the city were properly patrolled by military empowered to deal with the disturbers?