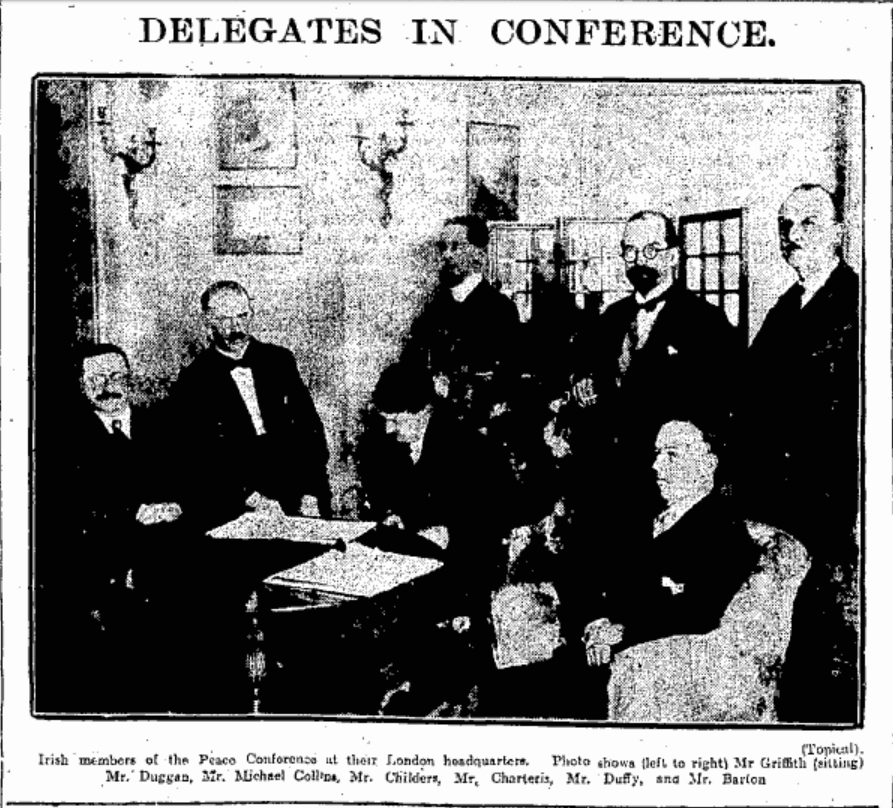 Exactly three months after the truce had been signed, Irish representatives walked through the front door of 10 Downing Street to negotiate the political future of Ireland. The Irish Times’ London correspondent reported on the mood at the end of Downing street.

The crowd assembled in Whitehall this morning to welcome the Sinn Fein delegates was comparatively small compared with that which gathered earlier in the year to cheer Mr. de Valera. Probably, about a thousand people had met at the end of Downing Street, including a great number of women who were not the least enthusiastic. Among the crowd were many English who, in reply to cries of “Up Sinn Fein,” and so on, did not hesitate to cheer for several British statesmen, including Mr. Lloyd George. The exchange, however, was most good-humoured, and when the Irish present took to singing hymns and reciting the Rosary the English people were very quiet and respectful.

The Irish delegates arrived in Downing street in two magnificent Rolls-Royce cars which were greatly admired by the crowd. It is said that the delegates have no fewer than five cars awaiting their orders at any time; this seems to be an allowance of one apiece. Even the members of the staff seem to have “taxi”-cabs at their disposal whenever required, and time passes very comfortable in Hans place. It is to be hoped that this will have a reflex action on the Conference.

Nothing was revealed after the meetings of the Conference to-day, but the situation was considered hopeful. It is rumoured that the discussions to-day centred upon procedure and the precedence to be given to the different points for discussion. It is not known definitely whether a report is being taken of the meetings; but, in any case, nothing is to be issued for publication at present, except the barest intimation that meetings are held, and the names of those present. Secrecy is considered a safeguard in political circles, and possibly it may be.

The Westminster Gazette comments upon Mr. de Valera’s pronouncement last night by saying that he is certainly not the happiest correspondent, and continues: “His address to the people of Ireland is given more than one interpretation this morning, and is capable of more than one interpretation. We prefer to read it as a hint and a warning to the more ardent spirits in Ireland that the Conference may not realise the whole of their anticipations, and that they must be content to believe that the Irish delegates are doing their best in any circumstances…. There are passages which suggest a more belligerent attitude, but the message ends on the right note in a call for ‘unwavering faith in those who have been deputed to act in the nation’s behalf.’ The worse that can be said of the message is that it seems unnecessary.”