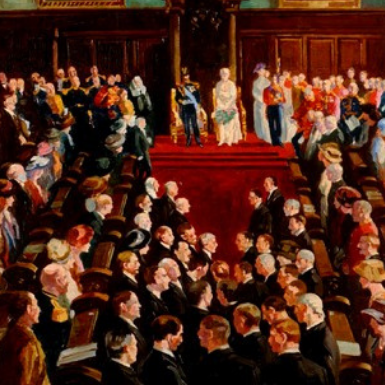 On 22 June 1921, King George V and Queen Mary arrived in Belfast for the formal opening of the Northern Ireland parliament. While the visit offered Unionists a chance to show the strength of their British connections, many Nationalists felt it showed a basic disregard for the recent suffering of the city’s Catholic population. Despite concerns that a royal visit might lead to increased violence in Northern Ireland, the king’s advisers believed that a carefully scripted speech promoting peace and reconciliation might help improve the current situation across the island of Ireland. The king’s speech at parliament’s opening is given here in full.

Members of the Senate and of the House of Commons,

For all who love Ireland, as I do with all my heart, this is a profoundly moving occasion in Irish history. My memories of the Irish people date back to the time when I spent many happy days in Ireland as a midshipman. My affection for the Irish people has been deepened by the successive visits since that time, and I have watched with constant sympathy the course of their affairs.

I could not have allowed myself to give Ireland, by deputy alone, my earnest prayers and good wishes in the new era which opens with this ceremony, and I have therefore come in person, as the Head of the Empire, to inaugurate this Parliament on Irish soil.

I inaugurate it with deep-felt hope, and I feel assured that you will do your utmost to make it an instrument of happiness and good government for all parts of the community which you represent.

Few things are more earnestly desired throughout the English-speaking world than a satisfactory solution of the age long Irish problems, which for generations embarrassed our forefathers, as they now weigh heavily upon us.

Most certainly there is no wish nearer my own heart than that every man of Irish birth, whatever be his creed and wherever be his home, should work in loyal cooperation with the free communities on which the British Empire is based.

I am confident that the important matters entrusted to the control and guidance of the Northern Parliament will be managed with wisdom and with moderation, with fairness and due regard to every faith and interest, and with no abatement of that patriotic devotion to the Empire which you proved so gallantly in the Great War.

Full partnership in the United Kingdom and religious freedom Ireland has long enjoyed. She now has conferred upon her the duty of dealing with all the essential tasks of domestic legislation and government; and I feel no misgiving as to the spirit in which you who stand here to-day will carry out the all important functions entrusted to your care.

My hope is broader still. The eyes of the whole Empire are on Ireland today, that Empire in which so many nations and races have come together in spite of ancient feuds, and in which new nations have come to birth within the lifetime of the youngest in this Hall.

I am emboldened by that thought to look beyond the sorrow and the anxiety which have clouded of late my vision of Irish affairs. I speak from a full heart when I pray that my coming to Ireland today may prove to be the first step towards an end of strife amongst her people, whatever their race or creed. In that hope, I appeal to all Irishmen to pause, to stretch out the hand of forbearance and conciliation, to forgive and to forget, and to join in making for the land which they love a new era of peace, contentment, and goodwill.

It is my earnest desire that in Southern Ireland, too, there may ere long take place a parallel to what is now passing in this Hall; that there a similar occasion may present itself and a similar ceremony be performed.

May this historic gathering be the prelude of a day in which the Irish people, North and South, under one Parliament or two, as those Parliaments may themselves decide, shall work together in common love for Ireland upon the sure foundations of mutual justice and respect.