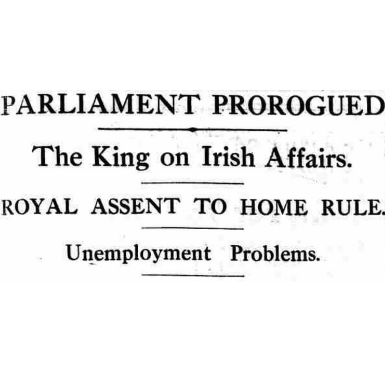 In December 1920 King George V signed the Government of Ireland Act, allowing for the partition of the island into two Home Rule states of 'Northern' and 'Southern' Ireland. The day after the act was passed, the Belfast News-Letter gave an account of the session in the House of Lords, and the moment that the bill passed into law.

Parliament was prorogued last night, but the two Houses were so busy that it was not until 11-30 o’clock that the Commons were summoned to the Upper Chamber for the Prorogation, when the Kings’ Speech was read.

The Speech from the Throne, after dealing with foreign affairs and financial matters, referred to the efforts of a section of the Irish People, by a campaign of crime and outrage, to sever Ireland from the Empire, expressed sympathy with the loyal servants of the Crown in their efforts to restore peace, and the hope that the Act to which his Majesty had given his assent would bring about unity and friendship between all peoples of the Kingdom.

My Lords and Members of the House of Commons,

The state of affairs in Ireland grieves me profoundly. I deplore the campaign of violence and outrage by which a small section of my subjects seek to sever Ireland from the Empire, and I sympathise with the loyal servants of the Crown who are endeavouring to restore peace and maintain order under conditions of unexplained difficulty and danger.

It is my earnest hope that all sections of the people in Ireland will insist upon a return to constitutional methods, which alone can put an end to the terrible events which now threaten ruin to that country and make possible reconciliation and a lasting peace.

I have given my assent to a Bill for the Better Government of Ireland. This Act, by setting up two Parliaments and a Council of Ireland, gives self-government in Irish affairs to the whole of Ireland, and provides the means whereby the people of Ireland can on their own accord achieve unity.

I sincerely hope that this Act, the fruit of more than 30 years of ceaseless controversy, will finally bring about unity and friendship between all the peoples of my kingdom.

My Government are giving careful and anxious consideration to the question of naval strength as affected by the latest developments of naval warfare.