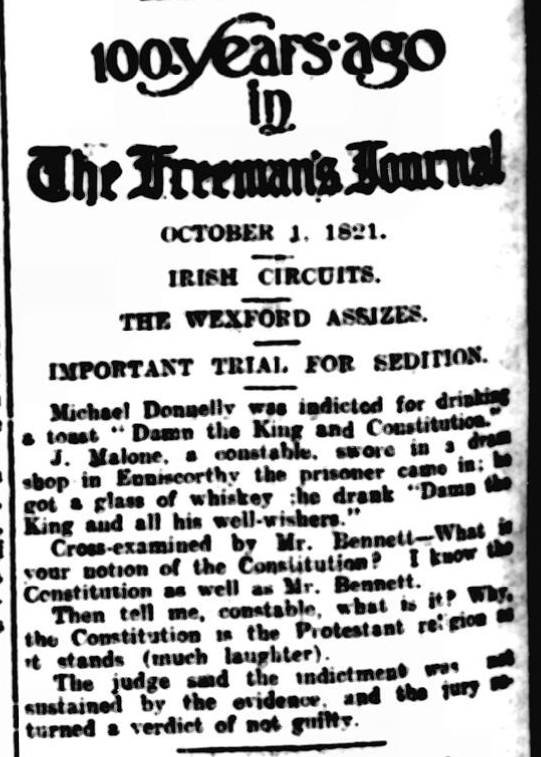 The “On This Day” format was not an invention of the 21st century. This edition of the Freeman’s Journal from 7 October 1921 reprinted an article from 1 October 1821. In the article, which was a report on court proceedings in Wexford, Michael Donnelly is indicted for drinking a toast to “Damn the King and Constitution” before making the jury laugh with quick-witted political jokes. The Freeman’s Journal was 19th century Ireland’s leading nationalist newspaper (perhaps most famously remembered as Leopold Bloom’s employer in James Joyce’s Ulysses). Reprinting this 100-year old article would have reinforced to the readership that separatist nationalism had a long history in Ireland although, curiously, this article does not appear in the 1 October 1821 edition of the Freeman’s Journal.

Michael Donnelly was indicted for drinking a toast “Damn the King and Constitution.”

J. Malone, a constable, swore in a drum shop in Enniscorthy the prisoner came in; he got a glass of whiskey; he drank “Damn the King and all his well-wishers.”

Then tell me, constable, what is it? Why, the Constitution is the Protestant religion as it stands (much laughter).

The judge and the indictment was not sustained by the evidence, and the jury returned a verdict of not guilty.