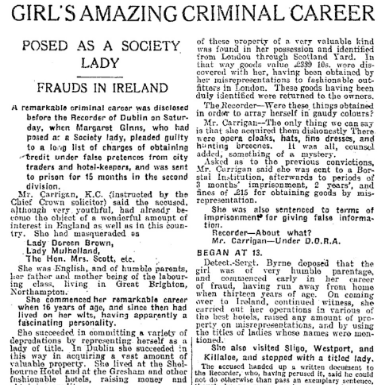 An unusual case appeared before the courts in Dublin in March 1921, when a young woman called Margaret Ginns was accused of fraud. Born in England to a poor family, Ginns ran away to Ireland when she was about 13. Posing under several aliases, Ginns had conned her way into high society, living at the Shelbourne Hotel and acquiring vast amounts of property and valuable clothes and jewels.

A remarkable criminal career was discussed before the Recorder of Dublin on Saturday, when Margaret Ginns, who had posed as a Society lady, pleaded guilty to a long list of charges of obtaining credit under false pretences from city traders and hotel-keepers, and was sent to prison for 15 months in the second division.

Mr Carrigan, KC (instructed by the Chief Crown solicitor) said the accused, although very youthful, had already become the object of a wonderful amount of interest in England as well as in this country. She had masqueraded as:

She was English, and of humble parents, her father and mother being of the labouring class in Great Brighton, Northampton.

She commenced her remarkable career when she was 16 years of age, and since then had lived on her wits, having apparently a fascinating personality.

She succeeded in committing a variety of depredations by representing herself as a lady of title. In Dublin she succeeded in this way in acquiring a vast amount of valuable property. She lived at the Shelbourne Hotel and at the Gresham and other fashionable hotels, raising money and obtaining credit. … There were opera cloaks, hats, fine dresses and hunting breeches. It was all, counsel added, something of a mystery.

… The accused handed up a written document to the Recorder … The document included a letter from her mother. It was melancholy reading, and he could only say that the accused could have earned a respectable livelihood if she had devoted her talents to useful purposes.