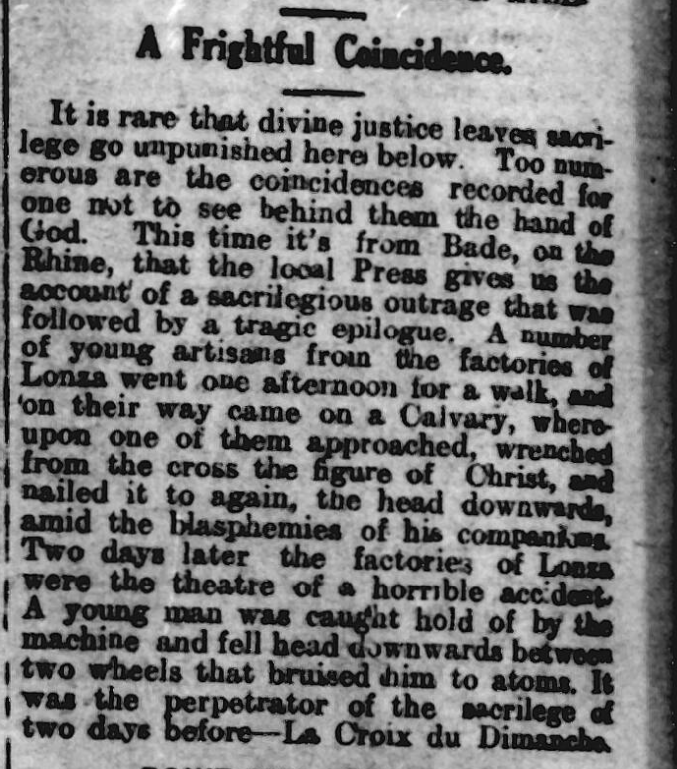 Local newspapers in Ireland had a famously international perspective. This short article from the Derry Journal (a tri-weekly paper with a wide readership in the north-west of the island of Ireland) reports on the gruesome death of a young man who blasphemed against a Christian cross in Germany.

It is rare that divine justice leaves sacrilege go unpunished here below. Too numerous are the coincidences recorded for one not to see behind them the hand of God. This time it’s from Bade, on the Rhine, that the local Press gives us the account of a sacrilegious outrage that was followed by a tragic epilogue. A number of young artisans from the factories of Lonza went one afternoon for a walk, and on their way came on a Calvary, whereupon one of them approached, wrenched from the cross the figure of Christ, and nailed it to again, the head downwards, amid the blasphemies of his companions. Two days later the factories of Lonza were the theatre of a horrible accident. A young man was caught hold of by the machine and fell head downwards between two wheels that bruised him to atoms. It was the perpetrator of the sacrilege of two days before – La Croix du Dimanche.