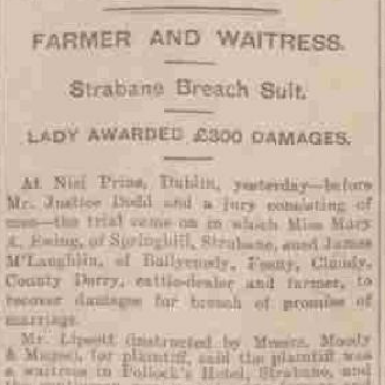 On 6 June 1921 a Dublin court awarded Mary Ewing from Strabane £300 in damages (£15,000 in today’s money) after she sued Feeny cattle farmer James McLaughlin for breaching his promise to marry her. The court found that for the past four years McLaughlin had spent time with Miss Ewing when he visited Strabane for the monthly fair and had written to her consistently over this period (with the letters containing ‘a number of crosses, representing kisses’), before abruptly ending the relationship in 1920. The ability to take legal action for breach of promise following a broken engagement was abolished in Ireland by the 1981 Family Act.

At Nisi Prius, Dublin, yesterday—before Mr. Justice Dodd and a jury consisting of men—the trial came on in which Miss Mary A. Ewing, of Springhill, Strabane, sued James M'Laughlin, of Ballyenedy, Feeny, Claudy, County Derry, cattle-dealer and farmer, to recover damages for breach of promise of marriage.

Mr. Lipsett (instructed by Messrs. Moody & Magee), for plaintiff, said the plaintiff was a waitress in Pollock’s Hotel, Strabane, and the gentleman was an extensive farmer and cattle-dealer in County Derry. Beginning in 1917 the defendant was in the habit of attending Strabane monthly fair, and during the following four years he was paying attentions to the plaintiff and writing to her frequently. When he came to Strabane he always spent the eve of the fair with plaintiff, who was then a girl of 20 years of age.

He had her down to Derry on at least three occasions, and spent the day with her, gave her some small presents, and took her out to see one of his farms, where she would afterwards be living with him as his wife. In the beginning of 1920 defendant ceased writing to plaintiff. In the March fair of that year she met him in Strabane, when he refused to go on, and everything dropped between them. In a country town no greater slur could be cast on a decent girl than to throw her over after having kept company with her for a number of years.

Miss Ewing, a good-looking young woman, was then examined, and deposed to the facts stated by counsel… Witness went on to say that defendant took her to the theatre, and proposed to her on the way back, and she accepted him.

Mr. Clery, addressing the jury for the defendant, said that his client had left things to the last minute, and was not now in a position make the case that there was no engagement. The jury found for plaintiff £300 damages, for which judgment was given.