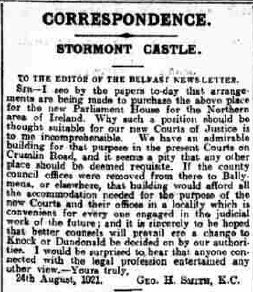 In August 1921, the press reported that the Government of Northern Ireland had purchased the mansion and surrounding property at Stormont Castle for the site of its new parliament building. The following letter, published two days after the announcement, shows disapproval of the proposed site due to its distance from Belfast city centre. In spite of this opposition, the Parliament Buildings at Stormont opened in 1932.

TO THE EDITOR OF THE BELFAST NEWS-LETTER

SIR—In common with a large number of loyal Ulstermen, I read with no little astonishment that subject to the approval of both Houses of Parliament and that of the First Commissioner of Works (Imperial Parliament), the Government of Northern Ireland had agreed to purchase the Stormont Castle estate of 224 acres as a site for the new Parliament, Ministerial buildings, and Courts of Justice, and I should be grateful if you will allow me space to express the hope that the necessary approval of the Northern Parliament will not be forthcoming to a project which every business man whom I have heard express an opinion on the subject characterises as ridiculous.

It will generally be conceded that one of the most important requisites of a site for the Parliament House is that it should be in a central position, or within easy reach of the centre of the city. This convenience of access is all the more important when we learn that it is proposed to have the Courts of Justice in the same building. It would be difficult to find a more inconvenient venue for witnesses and litigants and their legal advisers, and, above all, for the long-suffering jurymen (and women), than Stormont Castle, and the prospect of a five-mile drive to the city centre in the “small hours” does not seem particularly alluring to unfortunate members of Parliament attending late sittings of the House.

We were informed some weeks ago that the Assembly’s College had been acquired—at an exorbitant rent—for a term of three years, as a temporary house for the Northern Parliament, and a considerable sum is now being spent in making the college buildings ready for the sitting of Parliament next month. Surely there will be time within the next three years to find a suitable and central site for a building worthy of our city and province.

I earnestly appeal to the members of the Northern Parliament to pause and consider well before consenting to the proposed deal being carried out. If they consent they will be disregarding the opinion of the vast majority of the business men of Belfast, and they will certainly, and I think deservedly, forfeit the confidence of the electorate.—Yours, &c.,