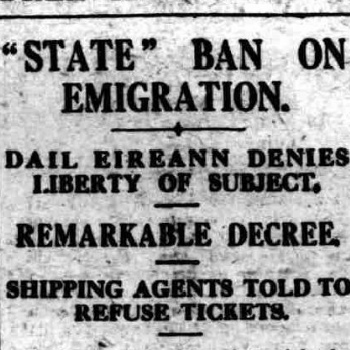 Emigration from the island of Ireland was considerably high during the early 20th century. A potent combination of economic upheaval and political unrest, particularly after the outbreak of the War of Independence, caused large numbers of people to seek opportunities elsewhere. In February 1921 alone, almost 2,000 people were recorded as emigrating to Britain or the United States. Alarmed at these large numbers, in April 1921 Dáil Éireann proclaimed that anyone wishing to emigrate must obtain permission from its Minister for Home Affairs. The ban was widely ignored because it was so difficult to enforce, despite fines and threats. The manager of the Dublin branch of popular travel agent Thomas Cook narrowly avoided being killed because he repeatedly refused to comply with the ban on selling tickets for voyages abroad.

A Proclamation issued to-night by Dáil Éireann states that it has been the design of England to weaken the Irish nation by forcing young men and women to ‘emigrate’.

‘In order defeat this design, Dáil Éireann has decreed that no citizen of the Republic shall leave Ireland without permission of the Minister for Home Affairs.’

The Proclamation also orders shipping and emigration agents to refuse to issue tickets or accept passage money. ‘Any person disobeying the regulation shall be deemed guilty of a grave offence against the welfare of the State in a time of war.’