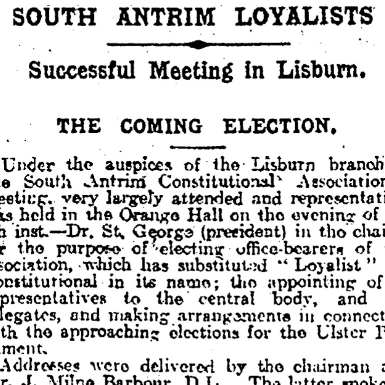 The elections to the new Northern Ireland parliament in spring 1921 caused considerable anxiety among Unionists. Although the six counties partitioned under the Government of Ireland Act had an overall Protestant majority, there were fears that divisions within Unionism would weaken their chances of securing a majority in the polls. These fears were reflected in a meeting to nominate electoral candidates by the loyalist South Antrim Constitutional Association in March 1921. John Milne Barbour, the Ulster Unionist candidate for County Antrim, gave a speech stressing the need for unity to ensure a Unionist victory. In the event, Barbour was successfully elected MP for County Antrim, and in 1925 was appointed as minister of commerce in the Northern Ireland parliament.

Under the auspices of the Lisburn branch of the South Antrim Constitutional Association a meeting, very largely attended and representative, was held in the Orange Hall on the evening of the 4th instant … in connection with the approaching elections to the Ulster Parliament.

Addresses were delivered by the chairman and Mr J. Milne Barbour, D.I. The latter spoke of the seriousness of the situation ... He pleaded for unity in voting for the seven selected candidates for the county, the sinking of all personal prejudices, and for loyal co-operation in supporting the elected members. Any laxity on the part of the electors would incur great danger, and it was up to all who were loyal to the King and Empire to prove worthy of the trust committed to their charge. They must show themselves capable of managing their own affairs and of making that corner of Ireland more prosperous, contented, and happy – a model for the other parts of their country to emulate.