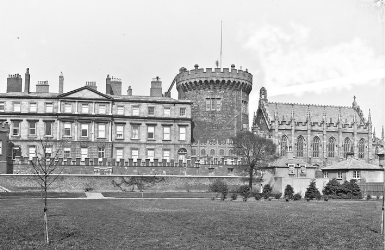 During the War of Independence there was an intense battle for control of the press on the island of Ireland. In July 1920 the Chief Secretary of Ireland, Sir Hamar Greenwood, employed the English journalist Sir Basil Clarke to lead the new ‘Publicity Department’ at Dublin Castle. Clarke’s job was to provide journalists with ‘propaganda by news’. While Clarke and Greenwood hoped to undermine the Nationalist cause with ‘fake news’, this strategy was criticised by journalists both in Ireland and Britain. In March 1921, Greenwood was also forced to answer questions in the House of Commons on the significant expenses associated with the scheme.

The House of Commons yesterday went into committee to consider the Irish Supplementary Estimates on a vote for £13,945 for salaries and expenses of the Chief Secretary’s office, etc, including £9,000 for publicity. […]

He came to the item called the Publicity Branch, and he wanted to be perfectly frank as to the reason for it. He was asking £9,000 for that branch. They were all agreed that there was a great propaganda under the auspices of Sinn Féin movement of Ireland. It was carried on, not only in the country, but in the world.

He felt that it was his duty to appoint a civil servant who was a trained journalist to take charge of the department in the Dublin Castle and to receive every journalist of every country and to supply him and the public with official information (cheers, and ironical Nationalist and Labour cheers), which it was his (the Chief Secretary’s) duty to substantiate or, if in error, to withdraw.

He thought that gentleman had carried out his duty very well. If there was any complaint about his work it was that not enough had been done (hear, hear) to put the whole case of the Irish and the British Government before the public of this kingdom and the world. This official prepared reports of military and police and from other official sources the facts of any given case and incident, and he received journalists who came to Dublin or to Ireland.

Freedom of the Press

He saw they were provided with every facility to see whom they wished and to travel without interference throughout the whole of Ireland, if necessary under police or military escort, and with the exception of one journalist from the hundreds who had visited Ireland, he had never heard one single complaint of discourtesy or inability to see what the journalist wanted. The Commander-in-Chief, myself, the heads of the departments, the local commanders and the heads of police had always received these journalists, no matter whom they represented. Hundreds of journalists had travelled in Ireland, and it was a fine record that no one had suffered a mishap. No one had complained except one who said his life had been threatened in Tralee some months ago. If that was a fact, no one regretted it more than he did.

Answering Mr. Hegge, Sir Hamar said the news were distributed through the usual Press channels under the head of ‘official communications’, so that everything could be checked by that House for accuracy.

In reply to Commander Kenworthy, Sir Hamar said the Department did not issue opinions. It confined itself to statements of facts, and that was one reason why he had selected a trained journalist who was also a civil servant.