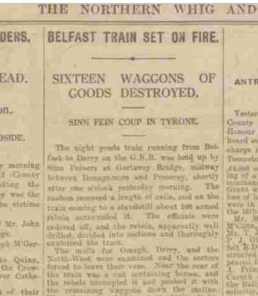 Two weeks after the IRA derailed a troop train at Adavoyle, a further attack took place on a goods train en route from Belfast to Derry. IRA raiders removed a section of rail, surrounded the train, and then set many of the waggons alight. The following report, published in The Northern Whig, shows the impact of these actions on daily life, in this case interrupting the bread supply to Omagh.

The night goods train running from Belfast to Derry on the G.N.R was held up by Sinn Féiners at Gortavoy Bridge, midway between Donaghmore and Pomeroy, shortly after one o’clock yesterday morning. The raiders removed a length of rails, and on the train coming to a standstill about 100 armed rebels surrounded it. The officials were ordered off, and the rebels, apparently well drilled, divided into sections and thoroughly examined the train.

The mails for Omagh, Derry, and the North-West were examined and the sorters forced to leave their vans. Near the rear of the train was a van containing horses, and the rebels uncoupled it and pushed it with the remaining waggons down the incline. They then proceeded to set the train alight, having unlimited quantities of petrol and paraffin. When the waggons were well under way the raiders decamped, and the train officials and sorters managed to save several waggons in the front portion of the train.

Sixteen waggons containing goods for Omagh, and the North-West, together with the mails for the same district, were totally destroyed. The alarm was given by a Dungannon “B” Constabulary patrol, and police and Special Constabulary rushed to the scene from surrounding towns. Unfortunately all roads within a seven-mile radius were blocked by fallen trees and progress was slow.

The raid was cleverly planned, as the train was topped in the deep cutting at Kerrib, some distance from the main road.

Police scoured the entire district, which was thoroughly searched some weeks ago by military for I.R.A. me on the run, but it is not known if any arrests were made. The mailvan containing official correspondence was situated behind the horse-box and escaped the notice of the raiders.

Yesterday the whole line was blocked, and passengers from Derry to Belfast were diverted at Omagh via Enniskillen and Clones, as the morning train could not proceed further than Pomeroy. Omagh was left without its usual bread supply, as the greater portion of the bread used in the district is Belfast manufactured and reached the town each morning by this goods train.