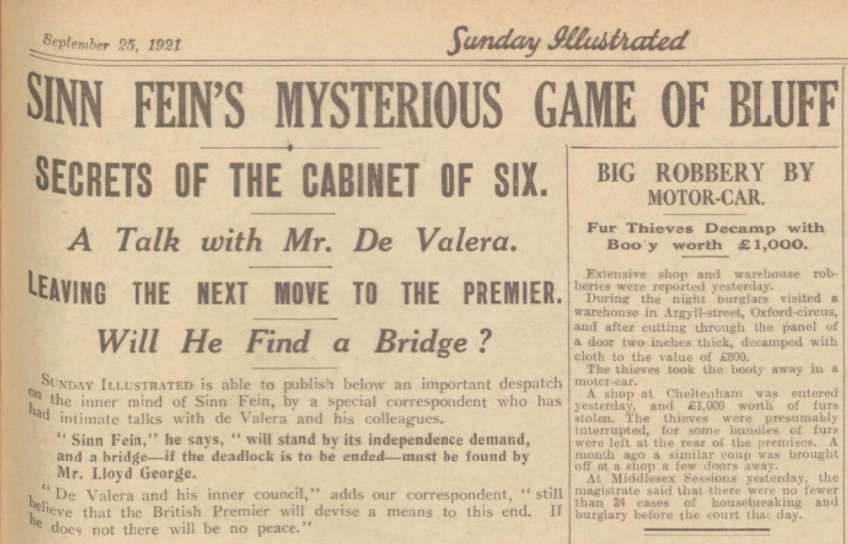 Viewed after the Irish Civil War, it can be easy to see diverging opinions on acceptable compromise among the republican movement before the discussions in late 1921. But to a reporter for the short-lived Sunday Illustrated, republicanism was anything but divided. The correspondent met with many Sinn Féin members – possibly including “fiery” Countess Marckieviez – and left with the impression that nothing could shake their unity.

SUNDAY ILLUSTRATED is able to publish below an important despatch to the inner mind of Sinn Fein, by a special correspondent who had had intimate talks with de Valera and his colleagues.

“Sinn Fein,” he says, “will stand by its independence demand, and a bridge – if the deadlock is to be ended – must be found by Mr. Lloyd George.

“De Valera and his inner council,” adds our correspondent, “still believe that the British Premier will devise a means to this end. If he does not there will be no peace.”

From the conversations I have had it is clear that De Valera and his thirteen stalwarts of the Inner and Outer Cabinets (to say nothing of the fiery Countess Marckieviez) will present a united front.

I know that Sinn Fein envisages a further period of war, up to two years or more. The leaders have men and money, as well as almost the whole nation at their back. “Holy dying” is here a craze and a cult, even the women being ready to sacrifice their husbands and sons.