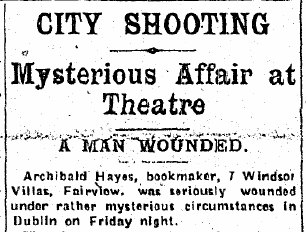 In July 1921 Archibald Hayes, a bookmaker’s clerk, was shot during a trip to the Winter Gardens of the Theatre Royal, Dublin. The shot was fired during a dispute between two hostile racing gangs. Hayes suffered a compound leg fracture and the incident was later reported as the first shot fired in Dublin since the beginning of a truce in the Irish War of Independence.

The shooting occurred in the Theatre Royal Winter Gardens about 10 o’clock, when there was a large and good-humoured crowd present. Hayes was seated at a table with another man and some ladies, when suddenly a revolver shot rang out, and he was observed to have been wounded. The Corporation ambulance was at once summoned, and the injured man was quickly removed to a private hospital, where it was found that his right femur had received a compound fracture, a bullet being embedded in his leg.

Some of the attendants immediately called for assistance, and D.M.P. and military police rushed in, and placed under arrest a man in whose possession a revolver is alleged to have been found. He was taken to Brunswick St. police station.

A spectator told a “Sunday Independent” representative that a short time before he had observed Mr. Hayes and some companions seated at the table, while at another table near by were 3 men in civilian clothes, one of whom stood up and began staring at Mr. Hayes, who appeared to be displeased by his attention. This man was then observed to have a revolver in his hand.

He shouted: “I will blow your brains out,” and immediately after a shot was fired.

At this time Hayes had also risen, and the two men were within a few yards of each other. Companions of Hayes alleged the assailant was then seen to draw a revolver, and was apparently in the act of firing it when Haye’s friend rushed over, caught his wrist and, after a short struggle disarmed him, subsequently handing the revolver to a military policeman.

A girl assistant, who received a slight injury to her hand, presumably caused by broken glass, stated that she did not know what happened until she saw blood on her hand.

Hayes, who has been a frequent visitor to the theatre, is described as a quiet inoffensive man. The man in custody is stated to have refused to give his name and address…