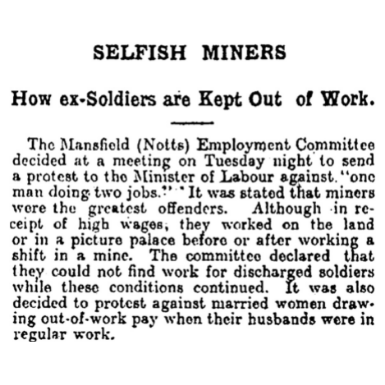 One of the ongoing problems after the end of the First World War was the struggles of former soldiers to find paid employment. This article from the Belfast News-Letter, reporting on a recent employment dispute in Nottinghamshire, argued that miners were to blame for working multiple jobs. The News-Letter had previously suggested that trade unions were equally to blame for keeping ex-servicemen out of work.

Selfish Miners: How Ex-Soldiers are Kept Out of Work

The Mansfield (Notts) Employment Committee decided at a meeting on Tuesday night to send a protest to the Minister of Labour against ‘One man doing two jobs’. It was stated that miners were the greatest offenders. Although in receipt of high wages, they worked on the land or in a picture palace before or after working a shift in a mine. The committee declared that they could not find work for discharged soldiers while these conditions continued. It was also decided to protest against married women drawing out-of-work pay when their husbands were in regular work.