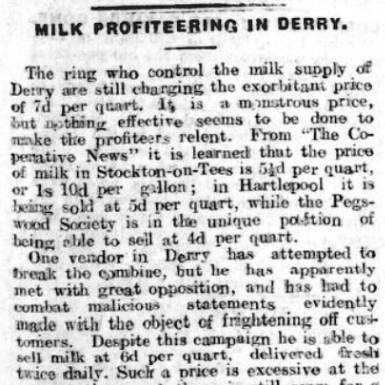 On 17 June 1921 the Derry Journal reported on conflict in the city’s dairy industry, where milk prices were far above the national average. The government-mandated shift to greater tillage farming during the First World War severely weakened the dairy sector in Ireland. As the sector adjusted to post-war economic conditions, there was fierce competition for the finite milk supply between private and co-operative creameries, which dominated in the west of the new Northern Ireland state. Farmers thus often looked for opportunities to sell their milk to rival creameries for a higher price, while co-operative creameries accused their private counterparts of unscrupulous price-fixing.

The ring who control the milk supply of Derry are still charging the exorbitant price of 7d per quart. It is a monstrous price, but nothing effective seems to be done to make the profiteers relent. From “The Co-operative News” it is learned that the price of milk in Stockton-on-Tees is 5½d per quart, or 1s 10d per gallon; in Hartlepool it is being sold at 5d per quart, while the Pegswood Society is in the unique position of being able to sell at 4d per quart.

One vendor in Derry has attempted to break the combine, but he has apparently met with great opposition, and has had to combat malicious statements evidently made with the object of frightening off customers. Despite this campaign he is able to sell milk at 6d per quart, delivered fresh twice daily. Such a price is excessive at the present time, and there is still room for a reduction to 5d per quart, but that milk can be sold at 6d per quart in the city shows at least that those charging 7d per quart are making more than a fair profit.