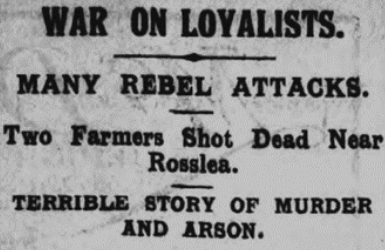 On 23 March 1921, gunfire and rioting broke out in Belfast as news emerged of a deadly IRA raid in Rosslea, County Fermanagh, two days before. In Belfast a Catholic civilian, Annie Jamison, was killed on her way to the shops on Vere Street, an area of North Belfast which saw frequent communal clashes and killings. Nineteen-year-old Robert McCracken was injured as he tried to help her. Earlier in the week in the Catholic border town of Rosslea, the IRA attacked the homes of sixteen Special Constables (or B Specials), killing three. News of the raid only served to further heighten tensions in Belfast following riots over the previous weekend, which had resulted in the death of John Graham, whose funeral was followed by the clashes that led to Annie Jamison’s killing.

Sinn Feiners carried out systematic attacks on Loyalists in the Rosslea district, County Fermanagh, on Monday night. Two men were shot dead by armed raiders, another wounded, and many houses were burned to the ground. The people of Rosslea are flying from the village in terror. Large bodies of Crown forces have arrived in the district, and two arrests have been made.

Rosslea, County Fermanagh, the centre of much turmoil and disorder a month ago, was the scene of more tragic incidents on Monday night. Two Unionists named Samuel Nixon, farmer, Tattymore, and William Gordon, caretaker on the Madden property, Springgrove, were each shot dead by armed raiders, while Nixon’s wife, in a gallant effort to save her husband from his terrible fate, was also shot and wounded in the hand, one of her fingers being almost blown away. A third man, named Joseph Douglas, of Aghafin, was also shot and wounded, and is now in hospital and reported dead; while a number of houses, and the property of Unionists, were completely or partly burned.

The York Street area was the scene of another tragedy yesterday, Mrs. Annie Jamison, of 10, Moffett Street, being shot dead, while Robert M'Cracken, 19, Vere Street, received a bullet in his wrist. The disgraceful occurrence took place shortly after the funeral of John Graham, of Emily Place, who, it will be recollected, succumbed in the Mater Infirmorum Hospital to a bullet wound in the abdomen received in the rioting in Great George’s Street on Sunday evening. Graham’s remains had been removed from the hospital, where he died, to his residence, and had been placed in a motor hearse, which, containing several mourners, had moved off.

Then shortly before half-past two there was rush on the part of a crowd, which had assembled in North Queen Street towards Vere Street, where a number of people had also gathered. It is alleged that shots were fired from them, and that the mob from North Queen Street replied with more shots, but a connected narrative of what subsequently transpired is rather difficult to obtain. The fact is established, however, that Mrs. Jamison was at the bottom of Vere Street, having, it is stated, left her home for the purpose of making some purchases in a shop in Vere Street.

She was shot in the head, and collapsing with a cry of “I’m shot”, expired almost immediately. Further firing ensued, and M’Cracken was going to her assistance when he was wounded. One man was seen deliberately reloading his revolver and firing again, and vigorous stone-throwing between the parties ensued, the greatest excitement prevailing. The police at once rushed to the scene and succeeded in separating the conflicting elements without having to fire, while reinforcements on Crossley tenders and an armoured car speedily arrived, and quiet was restored. The appearance of the street emphasised the intensity of the brief riot, as it was littered with stones and small paviors.

The services the ambulance were requisitioned, and Mrs. Jamison and M'Cracken were taken to the Royal Victoria Hospital. There, of course, the surgeons could only pronounce life extinct the case of Mrs. Jamison, but M'Cracken, after treatment, was able to proceed home in the afternoon. One arrest was effected in connection with the tragedy, a man named Joseph M'Keown, who is said to reside in Grove Street, being taken into custody. Mrs. Jamison’s husband is a shipyard worker, and there are three of a family, the eldest being a boy of fourteen years of age, two younger children having died not long ago. The dreadful tragedy naturally caused the greatest sensation in the district, which is made up of a network of small streets which converge in and around Sussex Street and Earl Street. Feeling ran very high all the evening, but the authorities, in order to prevent any recurrence of trouble, kept the armoured car on patrol up till curfew time. Police reinforcements were also kept available, but happily their services were not required.