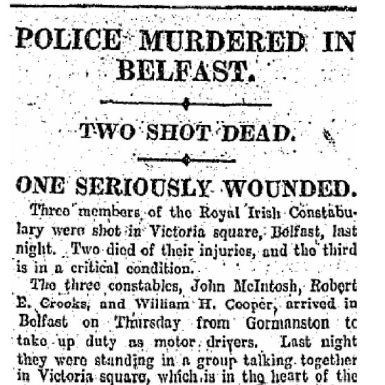 Police officers were frequently the target of attacks and reprisals during the War of Independence. This report from the Irish Times in March 1921 detailed the shooting of three Royal Irish Constabulary officers in Belfast, which witnessed repeated outbursts of violence on all sides from 1920–22. As this report shows, such attacks could occur even in busy pedestrian areas – in this instance at least one civilian bystander was severely injured in the shooting.

Three members of the Royal Irish Constabulary were shot in Victoria Square, Belfast, last night. Two died of their injuries, and the third is in the critical condition.

Three constables, John McIntosh, Robert E. Crooks, and William H. Cooper, arrived in Belfast on Thursday from Gormanston to take up duty as motor drivers. Last night they were standing in a group talking together in Victoria square, which is in the heart of the city, and was thronged at the time, when four or five civilians opened fire on them with revolvers.

A man named Alexander Allan, aged 50 years of 18 Afton street, was also wounded. So far as can be ascertained, he was passing the constables at the time of the shooting, and had no connection with them or their assailants.

The whole affair lasted only a few seconds, and immediately that they had fired on the police, the assailants mingled with the passing stream of pedestrians and got away. No arrests have been made.