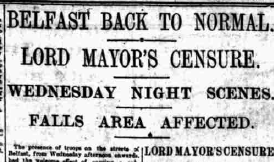 From 29 August to 1 September around twenty people died in street disturbances across Belfast. This article, printed in the Belfast Telegraph, details the subsidence of the violence following an increased police and army presence on the streets. The report goes on to state  that ‘Workers on their way from their homes to their respective places of employment this morning were relieved to find detachments of troops on duty at the various danger points. No fresh outbreak is reported’.

BELFAST BACK TO NORMAL

From about one o’clock till five in the afternoon the affected areas enjoyed a time of comparative quiet, which was only disturbed when a little group of gunmen, who had lurked all day in Academy Street, appeared once again and opened fire towards Donegall Street. They took no trouble to hide themselves, knowing that the people on whom they were firing were unarmed. They stood quite openly in the mouth of an alleyway, and held their fire till they saw a favourable opportunity. At everything and everybody passing the opening into Donegall Street they blazed away, and many narrow escaped were recorded. Later in the evening they attempted their favourite flanking movement on the knot of onlookers gathered near the scene. This time they emerged from Talbot Street, further along Donegall Street, and opened fire on the crowd assembled at the entrance to Academy Street. A wild stampede for safety ensued, and the marvel is that heavy casualties were not caused by the hail of lead which the would-be murderers poured into the fleeing crowd. Subsequently a Crossley tender and an armoured car arrived on the scene, but the snipers had made good their escape.

BUSY ON THE OLD LODGE ROAD

As dusk came down over the centre of the city the sharp crackle of renewed firing was heard. The gunmen had got busy once again in the Old Lodge Road and Carrick Hill areas. The sniper who had spent his day in command of Royal Avenue at the entrance to Library Street was again in position, and for a time kept up a more or less constant fire. Other gunmen in Wall Street swept Cavour Street with their weapons, but the full effect of their fire is not known. Military were hurried to the scene, and opened fire on the gunmen’s supposed hiding places, and the shooting soon died down.

In Brown Street and other sideways leading on to the Old Lodge Road and North Street snipers also claimed a number of victims. One of them was a fifteen-year-old boy named James McFadden, of Upper Malvern Street, who was carried on dead to the Mater Hospital shortly after eight o’clock. Four other boys were also admitted to the same institution suffering from wounds sustained about this time… Traffic along North Street was entirely suspended till military and police arrived on the scene, and the gunmen beat their usual retreat…