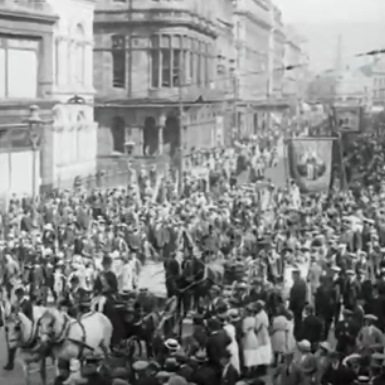 Held in the midst of ongoing communal violence in Belfast and an uncertain political climate following the previous day’s truce between British and Irish republican forces, the Orange Order’s annual Twelfth of July celebrations in 1921 were characterised by relative peace. The parades passed off without incident or any disturbances both in Belfast and throughout Northern Ireland, though violence would resume the following day when a woman was killed in the Falls and rioting took place in the north and east Belfast. In the ‘field’ at the Belfast celebrations – the traditional sounding board for Ulster Unionism, taking place in Finaghy in 1921 – James Craig vowed to defend ‘Ulster’s Rights’ at the upcoming peace talks in London.

The July Celebrations of 1921 were beyond all doubt upon a scale of unprecedented magnitude and enthusiasm. Never has any July demonstration in Belfast equalled that of yesterday, and the same is true of the various great gatherings throughout the province. The good order and decorum observed all over Ulster in connection with the events of the day was most praiseworthy, and in keeping with past traditions. Not one untoward incident occurred to mar the celebration, or leave something to be recalled with regret. That is only as it should be, and we offer congratulations to all concerned upon the triumphant success of the gatherings, and the splendid discipline and good feeling everywhere maintained.

Naturally the subject of the projected Irish Peace Conference was an outstanding theme in most of the speeches at the anniversary celebrations. Not that there is any objection to the restoration of peace – far from it… They desire with all their hearts to see Ireland freed from the haunting terror that has for so long, and with such terrible consequences, brooded over her. They have secured, after a tremendous struggle, a Parliament of their own, which will endeavour to obtain, and which, if necessary, will firmly enforce the law without respect of person, and without fear or favour. They realise that if by mischance, or by arrangement, the new Ulster Parliament should disappear or be deprived of what is and should be the main duty of a Parliament, namely, the firm preservation of law and order, their lives and liberty would be at the mercy of those who have made an inferno of the great part of Ireland.

The meeting at Finaghy started punctually at one o’clock, and by that time only about half the lodges in the procession had reached the field. The grounds were crowded even then, however, and as soon as the meeting commenced there was a rush to the place where the platform was situated. This structure was draped with Orange and purple bunting, and in front of it thousands of people stood in solid phalanx.

Colonel Wallace presided, and the opening prayer was offered by Rev. William Maguire. The Grand Master delivered a characteristically vigorous speech, in the course of which he said that nobody pretended that the Government of Ireland Act was all that Loyalists could wish for, but it accomplished one good purpose, and that was to secure for them their citizenship in the British Empire. “That is what you and I were prepared to fight for in 1914,” said the speaker, "and it is what we are prepared to maintain until the very end." He paid a graceful tribute to Lord Carson, who, he mentioned, bad sent his customary subscription to the orphan fund in connection with the Orange Institution; and then went to extend cordial welcome to Sir James Craig, Lord Carson's successor in the Ulster leadership. They were resolved, he said, to stand by Sir James Craig as loyally as they did by his predecessor. In reference to the Conference proposed by Mr. Lloyd George, Colonel Wallace expressed the opinion that Sir James Craig acted properly in accepting the invitation to meet Mr. De Valera in London. He added: “We trust in Sir James Craig and those whom he will take with him to the Conference. They know exactly what our feelings are and what our determination is, and here in Ulster know that no matter what company they may be in they will not do a single thing that will let down Ulster or Ulster men and women. They have our confidence, and know that our interests are safe in their hands… They seem to think that De Valera is going to get the better of us,” he proceeded. “Well, De Valera will have to be up very early in the morning to get the better of Sir James Craig.”

Sir James said if Mr. Lloyd George’s invitation had been rejected Ulster's attitude would have been misrepresented. Ulster would have been condemned in her absence, and her refusal to attend would have created a bad impression, in view of the appeal made by the King when he opened the Northern Parliament. Sir James warmed up to his subject in a manner that impressed the audience, and he evoked a storm of cheers when he said that his colleagues and he would not allow any tampering with the rights of Ulster. Sir James carried the audience with him from the beginning to the end of his outspoken and inspiriting speech, and made it clear that so far as he is concerned law and order will be maintained in Belfast and the Six Counties, and that no concession will be made to the extravagant demands of the Sinn Fein junta who issue their pompous proclamations and decrees from somewhere in Dublin.