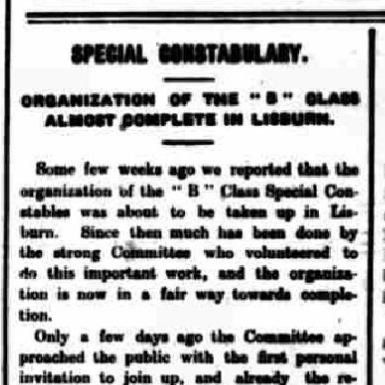 Special Constabulary. Organization of the “B” Class Almost Complete in Lisburn

Some few weeks ago we reported that the organization of the “B” Class Special Constables was about to be taken up in Lisburn. Since then much has been done by the strong Committee who volunteered to do this important work, and the organization is now in a fair way towards completion.

Only a few days ago the Committee approached the public with the first personal invitation to join up, and already the response has been most gratifying, in fact, it has been what might have been expected from Loyal Lisnagarvey. So numerous are the applications for enrolment that the printed cards were exhausted at the end of the two days, and now it is probable that the list of names will go forward to the authorities next Monday.

We have had an opportunity of perusing a circular, descriptive of the terms of service, and the many advantages which “B” men will enjoy. The matter might be summed up by saying that all the advantages under which the old “Specials” laboured seem to have been removed.

Unhesitatingly we say that every fit man in Lisburn should apply for enrolment in this force. Only a fixed number can be sworn in, but every man should be able to say that at least he applied. The best procedure is to hand in one’s name and address at the Police Barracks, write it on a postcard and mark it “B.” The organizers will do the rest, and selected men will be notified within a few days where to attend to be sworn.

Monday next will probably see the list closed. Don’t be amongst the shirkers. Every man may be needed sometime, if not just now. Join to-day.