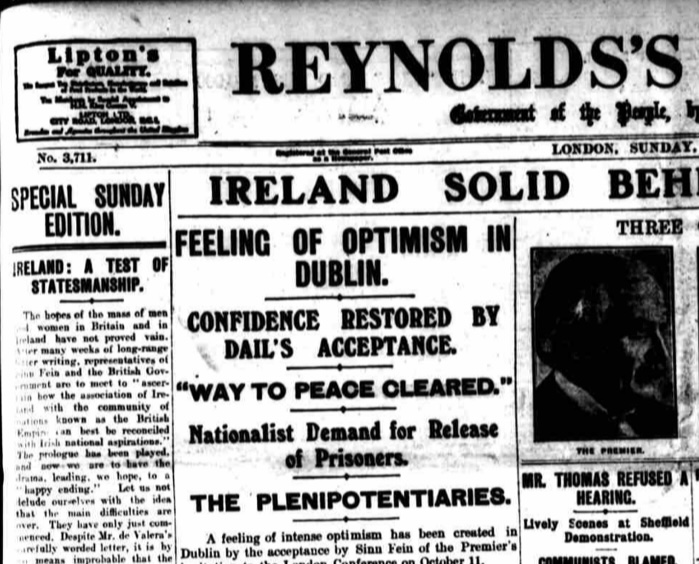 As both sides prepared for the upcoming conference in London, newspapers predicted who would attend the negotiations and reported on reactions to their announcement. Reynolds’s Newspaper, one of Britain's most popular Sunday papers, ran an optimistic feature on its front page the Sunday after the negotiations were announced. Their Dublin correspondent reported on the mood in Dublin andgave an overview of the coverage in Irish papers, including speculation over whether de Valera would attend the negotiations in person.

FEELING OF OPTIMISM IN DUBLIN.

Nationalist Demand for Release of Prisoners.

A feeling of intense optimism has been created in Dublin by the acceptance by Sinn Fein of the Premier’s invitation to the London Conference on October 11.

Indeed, the utmost confidence has been restored.

Irish comment strongly inclines to the belief that, now the road to peace has been cleared, peace will be found.

The “Cork Examiner” says: A give and take policy will smooth the way. Ireland looks forward with the fullest hope.

The “Irish News” declares: A great opportunity has arisen. The best interests of Ireland, Great Britain, and the world are involved in a just settlement of the Irish problem, which will bring to an end the oldest war in history.

The “Freeman’s Journal” asserts: That possibilities of a satisfactory settlement exist is the universal conviction.

A demand for the release of Sinn Fein prisoners from the internment camps is voiced by the “Freeman’s Journal,” which declares that the existence of the camps involves a hundred risks.

The parties to the conference, which will be held in the Cabinet room of 10, Downing-street, will probably be:

WHAT THE IRISH PRESS THINKS OF THE NEW POSITION.

(From Our Own Correspondent.)

There is a real feeling of optimism in Dublin to-night.

There was no doubt that the public were getting tired of the protracted correspondence between the parties. They had begun to have doubts and fears, but this atmosphere has given way to an immense sense of relief which is felt throughout the capital.

They agree with the Premier and Mr. de Valera that “conference, not correspondence, is the most practical and hopeful way to an understanding.”

In fact, never at any time since the 1916 rebellion has the outlook in Dublin been considered better. The utmost confidence has been restored by Mr. de Valera’s latest reply.

Mr. Fitzgerald told Press representatives that there was nothing to report.

So far as I can gather, there has been no change made in the personnel of the Sinn Fein delegation to London on October 11. There is plenty of time, however, for the Cabinet of DailEireann to make a selection. There is no confirmation of the rumour that Mr. de Valera himself might head the delegation, and not Mr. Arthur Griffith, as previously inferred.

It is expected that the delegation will leave Dublin at the end of next week.

Late stop press editions of the evening papers conveyed the decision of the Dail Eireann Cabinet to the people last night, and throughout the city there were unusual signs of merriment and festivity.

Editorial comments in the Dublin newpspapers to-day unite in applauding Mr. de Valera’s reply in its substance and form.

The conference is expected, if it proceeds favourably, to last several months, and no legislation for a settlement is probable until February at the earliest.