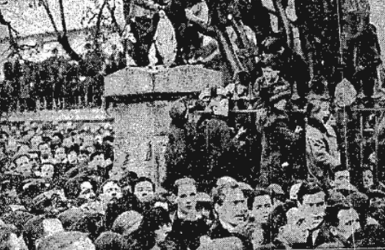 Crowds praying outside Mountjoy Prison for the executed IRA volunteers, published in the Freeman's Journal.

The violence that occurred on the island of Ireland during the War of Independence was the subject of frequent questions and debates in Westminster’s House of Commons. In March 1921 the Chief Secretary of Ireland, Sir Hamar Greenwood, faced heavy questioning from Nationalist MP T.P. O’Connor regarding recent attacks. O’Connor demanded an explanation particularly on the deaths of Limerick’s mayor, George Clancy, former mayor Michael O’Callaghan, and IRA volunteer Joseph O’Donoghue, who were allegedly killed by British Auxiliary forces. Greenwood was also questioned about the executions of ten IRA Volunteers at Mountjoy Prison.

Replying in the House of Commons yesterday to a series of questions by Mr T.P. O’Connor regarding happenings in Ireland, the Chief Secretary [Sir Hamar Greenwood] said that during the past week 33 lives were lost through acts of violence.

The right hon. gentleman, commenting on Sir J. Simon’s statement at the National Liberal Club that he had declarations that left him in doubt that the Limerick murders were committed by servants of the Crown, said it would have been more becoming an ex-law officer of the Crown to have assisted the Government to find the murderers rather than to make a partisan speech.

Sir H. Greenwood replying to Mr. T.P. O’Connor said that the military inquiry into the circumstances of Limerick murders had been held in public, and all the relatives of the deceased were invited to give evidence. Their refusal to attend was much regretted, and by none more than the local military and police authorities, who were anxious that the imputation had been made, suggesting that members of the Crown forces were in any way implicated, should be subjected to the fullest investigation. The Government saw no grounds for believing that a fairer or more searching investigation could be obtained by the substitution of a civilian Court, and to adopt such a course in an area under martial law would be contrary to any precedent.

He had not yet received the report of the Court of Inquiry into the deaths of Laurence Hickey and William Loughnane, near Thurles, but according to the police report these men were murdered by unknown and disguised men on the night of the 9th inst. Denis Regan and William Griffen were attacked, apparently with intent to murder, in the early morning of the following day, also by disguised and unknown men. He was informed that the sentences of death passed to Thomas Wheelan, Patrick Moran, Francis Flood, Patrick Doyle, Thomas Bryan and Bernard Ryan were duly executed that morning at Mountjoy Prison.

The total number of lives lost through acts of violence during the past week so far was known to be 33 – seven being police and 26 civilians.

Crowds praying outside Mountjoy Prison for the executed IRA volunteers, published in the Freeman's Journal.