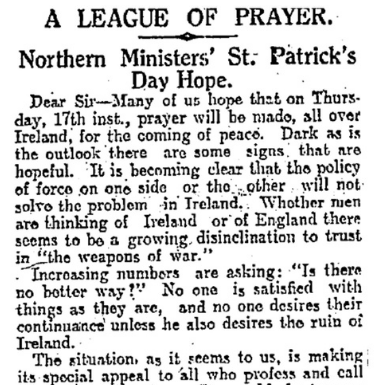 The St Patrick’s Day celebrations in 1921 saw few of the parades or public celebrations that traditionally marked the national festival. Ongoing hostilities in the War of Independence, and the existence of martial law in many places, made such celebrations impossible. Against this backdrop, religious leaders across the island of Ireland used the occasion to call for peace. This letter to the Freeman’s Journal, signed by four Northern Protestant ministers and published the day before St Patrick’s Day, called readers to join in a ‘league of prayer’ for peace. The ministers' decision to send the letter to the well-known Nationalist publication was possibly an attempted olive branch, designed to show Protestant commitment to peace.

Dear Sir, Many of us hope that on Thursday, 17th instant, prayer will be made, all over Ireland, for the coming of peace. Dark as is the outlook there are some signs that are hopeful. It is becoming clear that the policy of force on one side or the other will not solve the problem of Ireland. Whether men are thinking of Ireland or of England there seems to be a growing disinclination to trust in ‘the weapons of war.’

Increasing numbers are asking: ‘Is there no better way?’ No one is satisfied with things as they are, and no one desires their continuance unless he also desires the ruin of Ireland.

The situation, as it seems to us, is making its special appeal to all who profess and call themselves Christians. It would be treason to God, on their part, if they, in the hour of Ireland’s need, confessed themselves hopeless and helpless. They know full well that a way for[ward] has been revealed for all who would be Christ’s disciples. […]

We are printing three prayers which will, we hope, be largely used: One … is from St Patrick’s hymn; one is from St Anselm; the third has been written for the present hour.

We are asking God to raise in Ireland men and women with the faith and the daring to act as Christ’s disciples, and that there may be given to leaders in the Churches and in the political parties a new vision. We shall be very glad to forward copies of the prayers to any part of Ireland if stamped addressed envelopes are sent to any of us who sign this letter. St Patrick belongs to us all; let all who revere his memory make his prayer their prayer, and out of the chaos and conflict in Ireland a way shall be found to reconciliation and peace.