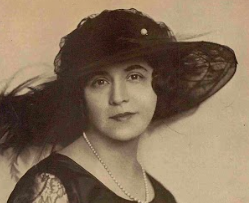 In August 1921, society journal The Tatler printed a press portrait of Maud Kerr Smiley (née Simpson), the sister of Ernest Aldrich Simpson who was best known as the second husband of Wallis Simpson, future wife of King Edward VIII. The accompanying profile referred to Maud only as Mrs. Peter Kerr-Smiley, including information on her husband’s career and achievements, such as the fact that he was MP for North Antrim.