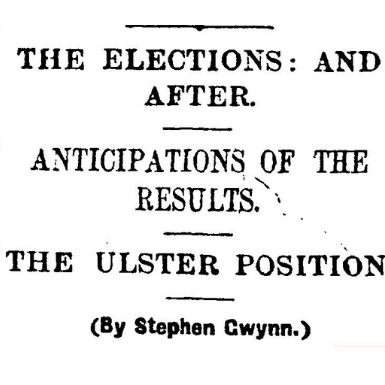 On 15 May 1921 The Observer’s Stephen Gwynn reported on recent events in Ireland and predicted the outcome of the upcoming Northern Ireland general election. He thought it likely that the Ulster Unionist Party would win 38 out of a total of 52 seats. In the election, the Unionists actually won 40 seats, with the remaining 12 divided equally between the Nationalist Party and Sinn Féin.

… Every independent Unionist candidature is withdrawn; there is no Independent Labour candidature. Sinn Fein and Nationalist unite on a common platform of voting to prevent the Ulster Parliament from establishing itself. Mr. Devlin, who is active in the contest, and whose name is put forward in several constituencies, claims that only thirty-four members out of fifty two will be returned in support of Sir James Craig.

Eighteen seats is regarded as the maximum which the Abstentionists may secure on a strict party vote. If they win twenty, the Ulster Parliament is dead. Judging from a distance, and purely on general grounds, I should think it likely that Sir James Craig would secure perhaps thirty-eight seats. If he gets forty, he has won. A bitter cleavage between Sinn Feiners and Nationalists would follow, each accusing the other of defection.

The strength in his position is that he fights an alliance; the weakness, that the dislike of partition is much stronger than any liking for the Act.