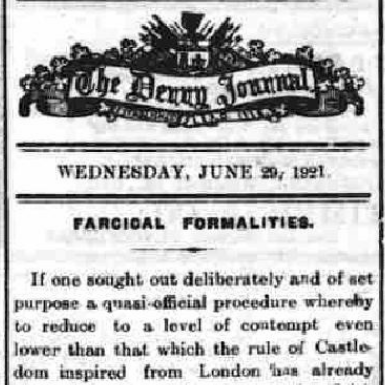 The Government of Ireland Act of 1920 partitioned Ireland, creating two new home rule states of Northern and Southern Ireland. Sinn Féin refused to recognise the Parliament of Southern Ireland and viewed the elections as a contest for the second Dáil Éireann. 124 Sinn Féin candidates were returned unopposed and the remaining four seats were taken by Unionist candidates. On 28 June 1921, the Parliament of Southern Ireland met at the Royal College of Science for Ireland in Dublin. The four Unionist MPS, representing the University of Dublin, were the only candidates to take their seats in the House of Commons and the house adjourned after electing Gerald Fitzgibbon as Speaker. This was the only formal meeting of the parliament.

If one sought out deliberately and of set purpose a quasi-official procedure whereby to reduce to a level of contempt even lower than that which the rule of Castledom inspired from London has already reached in the estimation of the Irish people, he could not conceive a more effective mode than that followed in connection with the summoning of the “Southern Irish Parliament.” According to a communique issued on Saturday by the Castle authorities that “Parliament” was to meet yesterday afternoon at three o’clock in the Council Chamber of the Department of Agriculture and Technical Instruction, Upper Merrion Street, Dublin.  The authors of this pantomimic “whip” solemnly decided that “no individual notices will be issued to members of either House.” Why not? Why curtail so abruptly the farcical preliminaries?

If the slightest spice of sincerity or of seriousness underlay this formal notification for what reason was it so shabbily shorn of the particular application which the veriest rudiments of courtesy called for on this occasion? About 192 individuals are supposed to be concerned—64 Senators and 128 Commoners. The sham character of the “call” comes into bold relief when it is remembered that, even were they willing to respond to the sham summons, it would be physically impossible for almost one hundred of the members of the “Lower House” to do so. The self-same Castle Department which ironically invited them to the Merrion Street Council Chamber insists on keeping the bulk of these members interned, imprisoned, or “on the run.” Moreover, not one half of the 64 Senators have qualified.

The hollowness of the invitation performance was evidently so pronounced that the Viceroy let it be understood he would not put in any appearance. It was intimated that “the Lords Justices” would attend instead. There could, of course, in the circumstances, be but one sequel to this clumsy display of arrant hypocrisy. The sequel revealed itself in negative form yesterday. There was no meeting of the “Southern Irish Parliament”. The invitation of the Greenwood spider to enter a “Partition parlour” has only served to intensify the feeling of loathing for such ignoble tricks that already dwells in the minds of people of all classes.

The sham nature of yesterday’s ceremonial was revealed by the skeletonised attendance—15 Senators out of 64, and 4 Trinity College Commoners out of 128, equivalent to less than 10 per cent of the total roll, and not much more than 3 per cent. of the Commoners’ roll. Truly a very thin ghost — a very pale phantom of a “Parliament” in which, we read, there was “very little public interest.” No wonder…